"Shtick" and "The Joyful Sea"

Some talk over you, interrupt
sooner and more loudly
the longer their triumph
goes on; invent facts
and statistics, spittle-spray them
or invoke what “everyone knows”; if you say
That’s just not true, they assume
the look of one martyred
by fools, change the subject
(insofar as there is one, still); this counts
as passion. Some
maintain excessive rapidity
and volume but repeatedly
use your first name; were told
this shows friendliness, openness. Others
murmur; the lies
are part of the restful flow,
which, disrupted, grows gentler; the master
of this technique (one should remember) owns
an icon of Jesus endorsing
the master’s younger leisure-suited self.
Some address in your face a room, an
auditorium. And those
of the lower orders
who follow and adore extend, as they preach,
a finger towards a chest
it may or may not reach.

Whales, smaller now, approach the shore
to urge a creature
like the proto-bear that became the proto-whale
to adopt the life aquatic.
A late big post-dog
(whose ears might become interesting,
think the whimsical late whales).
The dog considers their arguments
and begins to hunt the shallows, then farther out,
and to breed accordingly. An ex-penguin,
who, moving north, had tried land for a while,
lopes past him to splash back into the ocean.
The largely depleted sky
is crossed by former fish; former
birds do better in the water.
The seas do their big storms, between
one coastline and another
(some farther now, some closer).
For a while they did it
to cleanse themselves, but for ages the last junk
has been powdered and sunk – it’s just
high temperature, now, and spirits.
Days pass. In the depths, a former former dog
addresses a former whale. Though neither
can look up (the light’s too bright), the first
retains an ancient politeness: “Why
did you invite us down here?
We kept our fangs, they grew,
we eat you … Now the sun’s expanding.
Did you just want to give us
an extra hour or two?”
The whale, though by now talked out, says mildly,
“Perhaps we figured we’d want company.” 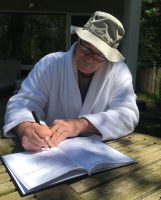