The allergist hums Marvin Gaye by eleven varieties of the baked wheat cracker. A security camera pointed at the retaining pond, but really, could you define adequate when all the travelmugs are missing? Chant of branches while remorse collects by the curb. Not progress but refolding, freedom a waiving of the by-laws. “Teleology is outdated” he said from the back of the cul de sac. The last time I heard the word redemption was from a guy who then dropped a Springsteen impression in the Best Buy parking lot. Beyond, goldenrod, high tension wires. Vistas are temporarily unavailable. A realm of highspeed blenders, looking for a suitable numbness in the offphrase, our mintiness unsweetened.

Two treefrogs in the neighbors’ trees. Starbucks. Mars low above the beach. Home Depot. The local team wins with a walk-off in the 12th. Chick-Fil-A. My wife’s halfsmile. Target. The first of the Perseids. Facebook. Last of the peaches. Gazprom. Suburbs unamazed in the heat. Taco Bell. Humidity fogs the windows. Disney. Three air conditioners overtone. Comcast. A tomato sandwich, bread fresh from the toaster, some basil from a pot on the back porch. Apple. Here’s the spraypaint by the councilman’s house: under the paving stones, the highway. Target. The name made effable, circular, forging only itself. Xerox.

Then all the tales went awry. Only the shrug of the anxious fabulists who nap among winter wheat, someone’s plot unperfecting. An explorer’s fable creaks presently: gold dream, as if beyond the ridge we could see all. Shuffle, evade – he stumbles, zooming westward, floorward, besuited apparatchik fumbling for a story in a spited realm unmeaning. He dreams immaculate, erasing and erase, fearing flood and antiflag in his feely realm. This world simpled to boxes, supreme unthought. Name the thickened days. I will sing an eschatology in falsetto. The streets are absent trees, the surveyors lost in the hollow. This groundless nation. 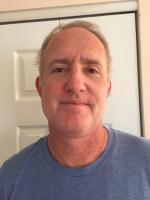 Bill Freind's book American Field Couches was published by BlazeVox in 2008, and his chapbook An Anthology was released by housepress in 2000. He's had work in the Journal of Poetics Research, Noon: A Journal of the Short Poem, Western Humanities Review, Jacket 2, and others, and he's a contributing editor at Dispatches from the Poetry Wars.

One of the Guys by Bruce Taylor
"Share Your Visions" and "The Figure Outside" by Luis Cuauhtémoc Berriozábal
"A Warning to the Mild," "How Soon?," and "Skin" by Mark DuCharme
The Inevitable by Marc Frazier
"Dead-End Loitering..." and "Insular" by Alisa Velaj, translated by Arben P. Latifi
"For My Wife," "American Philosophy," and "Bald Head Sally" by Zev Shanken
Nine Paintings, August 2020 by Elizabeth Pratt
"when a river flows..." and "whisper & smoke" by henry 7. reneau, jr.
Someplace Without Washrooms by Alfredo Salvatore Arcilesi
"the feeling," "the fine art of kneeling," and "[can you tell me where it went wrong?]" by john sweet
"Bag," "Jesus Loves You," and "In Perilous Times" by Wendy Taylor Carlisle
"Branches Shaken by Light" by James Grabill reviewed by dan raphael
"I Have Not Heard This Before," "Searching Amongst Pictures of the Killed" and "Tin Soldiers and the River Burns" by Phillip Henry Christopher
Untitled Odysseus Poem by M. F. McAuliffe
"Hidden in the Mouth of Love (for Polly)," "Consecrated Torsos of the Holy Mannequins," and "Hallucinogenic Horror with a Christian Understanding" by Peter Marra
Why Do We Gamble for High Stakes? by Dirk van Nouhuys
Tooth Fairy on the Take by Vernon Frazer
"Policed Navidad," "Other Than," and "Three Sounds to Noise" by Vernon Frazer
"We Murdered Will Know Each Other," "Death Exists Only In Material," and "Drawn Under Locust" by Kyle Trujillo
The Tree on Quarry Street by Debra Leigh Scott
In the Rose Garden by Stephen J. Golds
"Two Very Big Words" and "The God of Sun Came Late Today" by Robert Knox
A Parable by Robert Knox
Now, Hours Later by Christopher Shipman
Question by Marguerite Guzman Bouvard
Eight Paintings, July 2020 by Moira Crone
"The Deepest Part of Dark" Virtual Book Release Party with Anne Elezabeth Pluto, Tara Campbell, and Kayla Rodney
"The always-never-whatever poem," "My brother's name bears the Grudge," and "Venus Erogenous" by Darryl / Dadou / Baron Wawa
"Génocidaire," "He's NOT my President," and "Desiring my boyfriend's body" by Sergio Ortiz
The Eyes of the Inmate by Foster Trecost
"Microbes" and "Surrealist Convergence" by Cindy Hochman
Uncle Drew's Lysergic Backbrain Apocalypse (Slight Return) by C.F. Roberts
"Black-out," "Random Phrases," and "The Jungle" by Bernd Sauermann
"Outskirts" and "Maybe Only Trees" by Tobey Hiller
"The Wrong Mice" and "Nether" by Tobey Hiller
The Door to Dawn by R. Grayson Wills
"Juliet" and "Greenheys Road" by Jeffrey Side
Sleeping in the Lot by Rodger Kamenetz
Diadem Toxique by Alan Sondheim and Maria Damon
Huggin #3, #4, and #6 by C. Derick Varn