Phone Call from the Parents

The night of the day of his arrest, after getting bailed out by fellow demonstrators, then attending a mass meeting until near midnight, Eli came home. A yawning roommate said, “Your folks called, Eli.” He held up fingers.

He called and could feel his father trembling through the phone three thousand miles away.

“So what the hell is going on? You’re arrested and you don’t bother to call us? We have to find out from your aunt Shirley-”

“She was dumbfounded,” said my mother.

“Who is watching the normal news hour and just happens JUST HAPPENS to see the police taking you away in a paddy wagon with your name splattered all over the national headlines!”

“Why in God’s name does it have to be YOU? Eight million college students in the United States-”

“Probably MORE than eight million. And of these eight million, most of whom are doing what they are supposed to do, studying and researching and enjoying everything that college has to offer, who is getting arrested-”

“WHY? WHY do you always have to be in the front lines? You’d think that for once in your life you could stand in the back? But oh no, does he stand in the back? Does he think maybe he should do everyone a big favor and not act so impulsively? Is that too much to ask? Oh, no, not this one.”

“It’s a huge student strike against racism, Dad. Ten thousand students are striking. More and more people in the community are supporting us. ”

“Dad, they fired a Black teacher for-”

“What are the charges?”

“The California State trustees said, ‘operating a sound truck without a permit.’ And disturbing the peace.”

“Operating a sound truck without a permit!” said his mother, “l never heard of anything so ridiculous in my life!”

“So why didn’t you get the stupid permit?” his father shrieked, “Tell us what’s so hard about getting a simple permit!”

“Jose, who owns the truck, said they denied it. They want to stop us.”

“Stop you from what? What are you DOING there?”

“I wrote you. I told you. It’s civil rights. They’re racists. We’re trying to change the racism.”

“You’re in San Francisco. You’re not in Alabama. You’re not in the South. You’re in college. We thought you were studying Chaucer and Shakespeare, Thomas Mann, Thomas Hardy, Hesse. That’s what you WROTE us.”

“Ma, I am. And we were also looking a racism in the English Department and me and several other students-”

“Several other students and I-” said his mother.

“Went over the curriculum and it was pretty astonishing. We found-”

“What’s that got to do with you inside a paddy wagon?” his father growled.

“Will you just hold on?”

“Why? So you can go out there again and get your stupid head bashed in?”

“Dig this. There were fifty courses, undergraduate and graduate with 500 books. Of those 500, only two were by Black writers. Four were by women writers. There were NO books, not one, by a Latino, Native American, or Asian American writer.”

“You’ve got to read the classics,” his mother said. “The rest comes later.”

“Why? And who determines what is a classic?”

“Don’t be silly,” said his mother, “And don’t get us off the subject.”

“I’m not. I’m trying to explain why I was arrested.”

“You were arrested,” said his father, “because you have some need to stand out and be in the front lines all the time. Maybe if you had gone into therapy none of this would have happened.”

“Do you need a good lawyer?” his mother said, “Leslie Tannenbaum says she knows this terrific lawyer who can help you. Are you near Pacheco Avenue? They say it’s out in ‘The Sunset’. Do you know what that means? Out by the sunset?”

“It’s probably right next to the Twilight Zone,” said his father.

“Call Leslie. She’ll give you the number. Call her, Eli. It’s important. It’s your future.”

“I’ll think about it,” I said, almost laughing, “my future is calling Leslie Tanenbaum.”

“OH, so NOW you think. Why didn’t you think when you were getting into that sound truck? What possessed you?”

“Dad, my friend Jack was talking on the microphone. He’s one of the leaders, and-”

“Dad, we’re on strike. It’s crazy here. People get arrested just for looking the wrong way at a cop. And a lot of time it’s not just the regular police but this special Tactical Squad that’s full of nutcases who LIKE to hit people.”

“Then don’t look at any of them. Get out of there and stay home until trouble is over. Stay home.”

“What are you TALKING about, you IDIOT!” his father fumed “Don’t encourage him!”

“Well, I meant it could help him come to his senses.”

“HOW? By having his brains splattered all over the pavement? Are you nuts?”

“Eli,” his mother continued. “You can do other things befitting your skills as a writer. Write the leaflets. They’re usually awful. They were back in my days at Brooklyn College and they are now. Full of jargon and rhetoric. Dogmatic. Arrogant. Not connecting. Getting away from the main issues. And you can help in other ways too, Elijah.”

His mother was the only person other than army officers, work supervisors and some teachers who had never called him by his first name.

“Help do the PR. We had terrible PR.”

“Sure “ his father snarled, “He can interview the police while they bash his head in.”

“He just got out of jail. He was on national news. And she wants me to calm down. A mashugana family!”

“Yes, every inch and ounce of you.”

“Uh, I have to get off. I have an early meeting tomorrow.”

“You’re going back out there, aren’t you?”

“After all we’ve discussed here.”

“Well, we may have to ask ourselves,” his mother said slowly, “if we are going to continue supporting you financially if this continues. We agree to pay for your education, not for picketing.”

“This strike is one of the greatest educations I’ve ever received!”

“We obviously have a difference of opinion on THAT note.”

This was all he needed. But so what, screw it. He could get a job any time he wanted. Clerical jobs were posted in almost every building on the campus. He didn’t need their money. He would probably psychologically be better off without it. 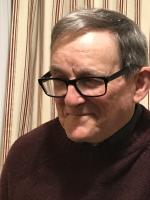