She had a strange neighbor of an indeterminate age. He could be twenty, she thought, or maybe forty. She was new in the building, she had moved in a few months before, armed with fresh hopes, hopes that seemed to have materialized, except for this one neighbor who became a blot on her anticipated existence. He had a small baby face, and a slight, stooping frame that gave the impression he was short and deformed, although he wasn't really. She imagined that he had acquired the stoop already as a child, trying to hide, and she felt a sympathy she wanted to but could not express. The worst part was his hair, kind of mousy brown, nearly reaching his shoulders, but not quite, for it curled upward in messy clumps. He was always neatly dressed, and was always alone when she saw him, just like she was. She realized that, just as she thought him odd, he probably thought her odd, for she was as alone as he was. She considered, with some discomfort, that if the other tenants in the building thought him odd, they probably lumped her with him, in the same category, even if she, unlike the neighbor, was fairly attractive, which should indicate, she hoped, that if she was alone, it was definitely by choice. The neighbor, too, she reasoned, should surmise this about her, unless, of course, he didn’t have a sense of himself as being peculiar or unappealing. Possibly, when he looked in the mirror, he saw a familiar, attractive face, just as she did when looking at hers. Maybe, she thought, she should introduce herself to him and so break the spell, but he never gave her an opening, and so, every time she saw him, she tensed up, and he did, too, as their antennae recognized this thing in one another, this “aloneness” this "oddness," not least because they seemed to keep the same schedule, they bumped into each other too often, mostly in the elevator, each time a bit surprised, giving a start, and then standing forlorn and quiet, waiting for the doors to mercifully open so he, who lived a couple of floors below her, would exit, and both of them would breathe again, released to their natural state. 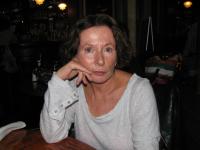 Tsipi Keller was born in Prague, raised in Israel, studied in Paris, and now lives in the U.S. A fiction writer (short stories, novellas, novels) and a translator of Hebrew poetry into English, she’s the author of eleven books, and the recipient of several literary awards, including National Endowment for the Arts Translation Fellowships, and New York Foundation for the Arts Fiction grants. Her fiction is often characterized as literary/urban/noir, and her short stories and novel excerpts have appeared in journals and anthologies in the U.S. and abroad (in German, Romanian, and Hebrew translations).