I’m riding in a cold rain, in sleet, and I don’t have a hat with a bill or visor. I hold my hand over my eyes to keep the water off, but I can’t control my bicycle with only one hand. I’m weaving on the street. My glasses are covered with drops. The ice particles are stinging my skin.

When I ride between buildings, I feel less wind, but when I get to a wide, through street, I am hit head-on with a blast. It’s difficult to make progress in the wall of air. I pedal hard but only inch forward.

Inside my building, I can’t see through my fogged glasses. I carry my bike down the stairs to the basement by feel, by the remembered position of my feet on the steps. The ridges in the metal stairs give traction; my feet don’t slide out from under me.

In the evening, my wife sees someone she recognizes on television. A middle-aged man is winning a movie award; he is making a brief speech on stage.

“He was my boyfriend,” she says. “He used to live a couple of blocks from here.”

Our daughter takes a photo of the TV screen and sends it to her social network. “You could have had a luxurious life,” she says to her mother, “but instead you live here, with him.” She points to me where I’m sitting, watching.

“He’s cuter,” my wife says, referring to me, and I notice that the award winner has a scraggly beard and a bald area on top of his head. I have no such features. I have thick hair on my head but otherwise am relatively hairless—a result of my Asian blood.

The winner thanks his wife and family.

“You could have lived in Hollywood!” our daughter says.

I look around and see our place has no glamour. Amateur artwork covers the walls; orange light shines from the lamppost just outside a window. The sounds of tipsy people, car horns and the occasional siren come up from the street below.

I want to get a tattoo of a devil’s head on the back of my shoulder. I can see the face of the demon in my mind. The fiend has green eyes, and red, ridged horns erupting from his forehead. His tongue is hanging out, as if he is panting or laughing. He has a beard and pointed ears; a tuft of hair sticks up from his scalp. He has no body—he is a disembodied head floating over an empty landscape. But his shadow lies on the plain, and he has clones. Little devils float in the air around him.

The tattoo would be hidden on the back of my shoulder—at least, for most of the time. If anyone wants to see the tattoo, I can always pull down my shirt collar.

If the observer is a friend, he or she might say, “Cool!”

If the observer is my mother, she might say, “That’s terrible! Why did you do that to yourself?”

Rain is still falling when I go out on my bike.

I’m rolling through an intersection when I hear a disturbance—a scuffle and a bang—and see a sport-utility vehicle parked at the curb. A short man is standing on the sidewalk; he has a kind of bat in his hand—a long white stick. A tall man gets out of the SUV and yells, “Don’t touch my car!”

The short man replies, but I can’t make out what he says. He approaches the tall man and swings his stick. The tall man seeks shelter in his vehicle.

Halfway down the next block, I can still hear their exclamations.

I almost hit a middle-aged woman who is crossing the street. “Watch where you’re going!” she yells.

She is in my lane, as is everyone I almost hit. It’s not my fault I nearly ran her down. “I didn’t touch you,” I call after her.

She makes a sound, or she might not be the one who makes the sound. Maybe someone’s pet barks. In any case, the sound doesn’t form itself into words. It is the sound of an animal expressing itself.

I take my daughter for a skin piercing—she is too young to get one on her own. We go to a shop she has chosen; it has a branch in our city and one in London. The London connection tells me this is a good-quality place for piercing.

The young man who does the job has an arm that is covered with something black. It looks like the sleeve of a shirt, but no sleeve is covering the arm. The black area is an all-over tattoo, the result of serious needlework.

My daughter chooses the smallest gold stud for her left nostril.

“You can’t take it out for six months,” the young man says. “Just disinfect it every morning and night. If you have any problems, come back and see me. I’m always here.”

My daughter and I celebrate by going to a deli store and buying cookies.

I see a man wearing camouflage pants and a backpack fiddling with a metal grate on the street. He uses his hands delicately, and he has a shiny device hanging from a beaded chain around his neck. The gadget looks like a silver box with a safety pin attached to it.

The man is flexible; he can reach the grate without kneeling. I don’t know if he’s trying to retrieve metal objects, such as coins, that have fallen through. For a second, I think he might be planting a bomb.

Another man comes by and talks to him. They both look into the air space above the subway line. They gently work the silver gadget into the grid. They can’t be planting a bomb. A stranger wouldn’t help another stranger blow things up.

On my bike, I stop at a red light, and another rider stops beside me. “How are you?” he asks.

“I saw you here last Friday.”

I look at the street numbers on the lamppost signs. “It wasn’t me,” I say. “I wasn’t here then. It must have been someone who looks like me.”

“It was a red bike,” My new companion says as the light changes. “Hello, neighbor!” he adds as he shoots ahead.

I’m ready for my tattoo. I know a shop where I can have one done. The shop’s walls are covered with colorful stencils. The choices are many: I could get words, abstract patterns, images of figures, or drawings of mythical beasts scored beneath my skin. But I want the devil’s head with its tongue hanging out.

I expect to feel a scratching, maybe a prickling, from a single electric needle. Later, I might feel a stabbing from multiple needles. The pain might become bothersome after an hour in the chair, so I’ll ask the artist to finish quickly.

“You can have speed,” the artist might say, “but you won’t have quality.”

The artist will keep the needles humming.

I park my bike at a railing next to the river and walk down to the water line. I get on a boat with a group of people. Among the strangers, I see a couple of people I know, but I don’t talk to them. They are having a good time, but I am with them by accident.

The boat churns upriver, and when it docks, everyone heads for a bar. I don’t want to go along. I just want to get my bike and head home. I walk from the landing—it’s about thirty blocks to where I started. But I can’t find my bike. I know the number of the street where I parked, but there are no numbers next to the river. The riverbank is just a paved area lined with flowers. I make my best guess as where the street might connect, and I see many bikes locked to the railing. I look at the objects carefully, trying to locate an old, red bike among the many generic two-wheelers. I don’t want to give up. I don’t want to go home on foot. I don’t want to admit that I don’t remember. 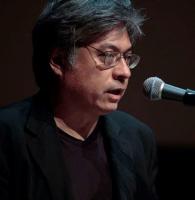 Thaddeus Rutkowski is the author of six books, most recently Border Crossings, a poetry collection. His novel Haywire won the Asian American Writers Workshop’s Members Choice Award, and Guess and Check won the Electronic Literature bronze award for multicultural fiction. He received a fiction writing fellowship from the New York Foundation for the Arts.