"My Problem with Statistics," "Name the Responsible Party," "'Adorable,' They Said," and "Back when destination was fluid"

My Problem With Statistics

Out of one hundred people . . . living in constant fear
of someone or something 79. – Wislawa Szymborska

In my childhood there were fathers to fear and nuclear war. Radiation. This was before children were given Sadako and the Thousand Paper Cranes, so no wonder we felt hopeless in spite of the cans my grandparents kept in the basement. The footage of the Shoah that appeared in school didn't help. Did they want to scare us into keeping our papers at the ready?

My friends are out demonstrating again. I'm proud of them but am in my house grading tests. What use are writers? Math teachers have something to say, but the problem with statistics is that most of the time, approximately 87% of the time, knowing statistics increases uncertainty.

Actually I made up that number, but given the time, could come up with one that most would agree on. The Doomsday clock was just a metaphor, hands creeping closer to midnight. Then in the 90s we stopped worrying so much about nuclear war, despite all the wars with their lists of the dead, and dirty bombs that kept on leaking radiation long after the explosions.

In an emergency don't forget to turn off the gas. There are a lot of books to pass out to the children before the end-times. They may need a minimal grounding in mathematics for which I recommend The Number Devil, though that story cleaves to number theory, while statistics is the mathematics of our data-burdened lives.

One in two? One in three? So many arguments interrupt the quantitative, demand a qualitative explanation. The list of fears grows even though the children deserve the 98% of the hope left in the bottom of the vessel.

The apple is a fruit well known for malfeasance.
Just when did you taste it?

You tasted fallen Persimmons ripening into alcoholic blots.
Of course it is your fault. You should have played the long game.

Instead of keeping lists, you planted all those fruit trees.
The hooting outside could be an owl, or just a mockingbird.

That's what they feared, recombinations of the pecking order.
Threats, and more threats: You can't scare me.

In a song that isn't a bad refrain to hold off threats.
You have all those postcards in search of stamps.

Reopen the post-office, fence off the stamp of (admit it) facism.
Some fruits are well known for malfeasance.

At first the photo seemed cute to be sure, child and beast.

Later when I asked my mother why she had allowed it, as though everyone expected the five year old to take care of the family alligator, she said, "That was a lifetime ago” and “my, you certainly have a gift for stating the obvious.”

Now we didn’t have the kind of relationship where I could dispute her or even throw my book at the wall. Instead I said, “Wasn’t Alli a tasty dish to set before the queen."

Unwilling, even now, to let me have the last word, she replied, “It’s all on me — do I look like carnival trash?”

I kept the photo as evidence, though the story got around plenty.

Back when destination was fluid with optimism, you would ask questions like What time is this place? People signed up for groups where the message was Follow your bliss as though Bliss were more someone in black jeans and a leather jacket standing by the door.

I believed in a better future like everyone else who stored grain and never sought hegemony. When did psychology stage a coup to undo all the work of our grandparents? In Argentina during the dirty war intellectuals had psychoanalysts to relocate nightmares. 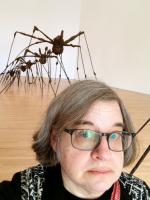 Carol Dorf is a Zoeglossia fellow. Her writing has been published in three chapbooks, and in journals that include Great Weather for Media, The Mom Egg, Aybss and Apex, About Place, Slipstream, The Journal of Humanistic Mathematics, Scientific American, and Maintenant. She is the founding poetry editor of Talking Writing, and teaches math in Berkeley, California. Carol recommends Fair Fight.