One morning, after she awoke and checked her Facebook, Mrs. Broadside found herself transformed into a terrible racist. It was so unlike anything she’d ever seen, this tsunami of notifi­cations, this legion of furious emojis. The comments themselves could have filled volumes. “The latest episode of ‘Profiles in Privilege’ stars the Head of Marketing at Best Friends’ Bank & Trust,” said one. “I’m worried about her kids,” said another. But the most distressing comments, and the most outrageous, were the ones that called her “Karen.” These people knew full well—they’d taken not just time to find her, but to tag her, too—that her name was Karynne, emphasis on the -rynne.

If they cared little for spelling, they valued privacy even less. The video, posted without her knowledge or consent, now had more than ten-million views. It had been filmed on Kindness Court, in the yard of the house that had just been sold—where, on the last leg of yesterday’s jog, Karynne had discovered a black family making party preparations.

She hesitated, pressed play, waited for the ad for car insurance to finish.

“We’re here because it’s none of your business,” the man told her, again. “We don’t owe you an explanation.” His name was Herbert Pax, according to the video’s description, and his tone was anything but kind.

“Oh, you don’t?” said Mrs. Broadside. “You don’t owe me an explanation? I’ll have you know that my husband’s on the board of the homeowners’ association. I speak for him and everyone else in Burbling Brook Estates when I say I want to know why you have erected a bounce house on this lawn.”

“It’s my birthday,” said the little boy, holding up four fingers. “I’m this many.”

Cutting an ice-cream cake into equal pieces, Mr. Pax asked Karynne to explain why his son didn’t belong at his own birthday party in his own front yard.

Karynne’s knees wobbled. She wiped sweat from her brow. Her mouth hung agape as the wheels of her brain ground to a dead halt. “You—you live here?”

That was right, Herbert said. “We closed on this property last week. Moved in Wednesday. And that’s all I’ve got to say to you. We’ve got people coming, and I’d appreciate it if you’d let us get on with our afternoon in peace.”

“You closed on this property last week,” Karynne said, as if convincing herself of the existence of alien life. “Okay, you win. I’ll go.” She took a tentative step toward the street, paused, and then turned to face the family once more, this time with redoubled authority. “But not before I see some credentials.”

“Papers. Official documents. A closing disclosure form. A property deed. Something. Any­thing in writing from a certified realtor.”

Herbert’s laugh was practiced and pain-soaked. “We’ve already given you more than you des­erve. And you know what? I’m not playing this game anymore. This is the last time I’m going to ask you to leave. You’re trespassing on my property.”

“I’m the one who’s trespassing?” Karynne said, her voice climbing a register. “That’s a good one. Maybe we’ll just have to see what the police think about that.”

“We’ve done nothing wrong. Go ahead and call the police.”

“That’s what I’m doing right now. Hello? Hello? Yes, my name is Karynne Broadside—emphasis on the -rynne—and I have an emergency. I’m standing outside Twenty Forty-Two Kind­ness Court. Yes, Burbling Brook Estates. There are three—three African-Americans in the yard, and I can’t be sure they belong here. They said they bought the home last week but—yes, I’ve asked to see the closing disclosure form. They won’t—yes, I said ‘please.’”

“She didn’t say no ‘please,’” said the voice behind the camera.

Karynne stomped on the manicured lawn. “No. No. I can’t even get them to—I’ve done everything in my power to—they’ve erected a bounce house, for God’s sake!”

Which the boy then made a run for, prompting his father to make a movement in his direction, which also happened to be toward Mrs. Broadside.

Karynne’s arms flailed. “You stay away from me!” she said. And into the phone: “Please! My husband’s on the board of the homeowners’ association! Send officers now! This black man—he’s got a—he’s got a knife!”

“Man, that bitch crazy,” said the voice behind the camera. 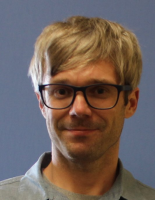