It winds up being the one of the worst
doozies in the history of the most recent
desperate conversation about public transportation,
light pollution, and street events that start
around 5 P.M. Ending whenever the heat, lightning,
and flash floods become too much for the brave idiots
and other assorted children of god or Mike the Pal.

This all happens back home. Tornado season
means something else entirely around here.

It wipes out her family. Two husbands. Three former husbands.
An ex-wife. Nine adult children. A handful of confused senior citizens
she couldn’t stand to discard. She doesn’t know any of this.
She’s been bouncing around couches and the informal churches
that moved from the Midwest, to the sky,
to this city that wants to be a million points of abstract light
by the end of the next fiscal century. She’s been hitting up these friends,
lovers, and pacifists with Marvel mutant fingernails for the past five years,
and she made it a point the whole time
to pretend she was a complicated, harrowing plan without a country.

It took most of the afternoon
to get from 3509 to 5702,
and she never really thought about tornado season
at any given point in that casually selfish
stretch of time.

She thought about it later,
stupidly throwing his gun from her deck
to the swimming pool below,
before almost slipping on the happy, overwhelmed
blood that was making its way to the deck below her.

She considered how things could always be worse.
Like how some people get to enjoy cigarettes
for fifty, sixty years.
While others only get a couple of decades
of mornings that at least start out well enough.

She didn’t miss them. She hadn’t for four years.
It would be a couple of days,
before someone with kind teeth and vile eyes
told her over drinks what had happened.

By then,
there was just way too much going on
to be able to grieve properly.

But it made things worse,
to be sure.

This barbershop shakes his faith,
and the black squares up, down, over, under,
and beneath the tiled floor are eating it up.

They dance badly. Thousands of preteen heat proms
burning each other alive, smashing wheels into forks and spoons,
and fucking on beds made of thick, wet, addictive paint.

Lights are jerks. At best,
they’re going to give the MVP cancer
at the one little league game they can be bothered
to attend. World Series. Everyone’s drinking. The parking lot
is going to be as bloody as the last time those idiot Civil War actors
shot up and played for keeps.

Lights suck. Walls suck. Sidewalks breathe conspiracies
and eat shoes like the trains wolf down hope,
even when they run on time.

Haircuts are fucking dumb, too.

If his leg bullies the foot into tapping that miserable
song for claustrophobic, out-of-shape houseboats
one more time, just one more time,
then something really bad is probably going to happen.

He finds that the cigarettes are still there.
His friend speaks.
The barber works on the hair and through the heart attack.
Hair screams like one of those Pixar money grabs come to life.

In other words,
no one should ever clean out the medicine cabinet,
and then leave the house for more than fifteen minutes.

Honestly,
even if there weren’t drugs involved,
it probably would have been better to just stay home.

The baseball scores are pointing to wayward, murderous cars,
riots in overstocked grocery stores,
and public parks built under that new ocean of broken glass
that everyone is thinking will mean good things over the long term.

Although no one ever elaborates on that.

In other words,
nothing good is coming up,
and nothing good comes out of going out,
living at home,
or going back to bed for a hundred bazillion minutes.

He starts smoking,
and a full two minutes goes by,
before he notices everyone is suddenly
trying to talk some sense into him.

Who the fuck lays down to listen to this happy horseshit?

I am not fucking okay with carnivals
that are really just an excuse for the cults
to hold elections that are apparently
in the eyes of a beholder who fidgets
with a necklace made of ambitious toenails,
and plays that same shitty acoustic cover
of Yellow Submarine every night people show up
to drink his whiskey.

Or is that too specific of a beholder?
Am I projecting this shit again?

Am I sweating too much again? Talking too much again?
Too little again? Are we actually drinking espresso
mixed with tequila and egg yolks,
talking things through like King Lear
had a chance to fix it all
all along,
or am I just assuming my religious conversations
are finally back on a two-way street again?

And again with the deep thinkers
who didn’t try very hard to begin with,
for reasons that go beyond mere staggering intelligence,
but insist on a schedule, chalkboard sobriety,
and an unfathomable measure of maturity.

Again with the parking lots
that are getting in the way of thinking
or doing one thing or the other.

My girl wrote a song about all of this.
She collects anxiety for the weeklong rainy day
she prays for,
when she thinks I’m finally fast asleep.

We have this grand agreement,
where she names the really mean ones
after things no one would ever think to associate with me.

If she gets rich,
or if I get arrested again,
we’re willing to revisit our current terms.

I love her,
as much as I can love anyone
who moves from one minor league softball team motel
to another without ever telling me.

Which,
as it turns out,
is an awful,
awful lot. 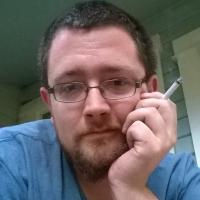 Gabriel Ricard writes, edits, and occasionally acts. He is a contributor with Cultured Vultures, a contributor with Drunk Monkeys, and an editor with Kleft Jaw. His first book Clouds of Hungry Dogs is available now. He lives on Long Island.