Is this word sacred, or that? That word or this? Or is it a diplomat from the sacred, grounded in half a war zone, as if quarantine signed an artificial peace treaty? Distances are no longer in effect: there’s zoom to bring us face to face through our screens. The weather’s good this morning; light turns the fern’s stems yellow, works through ti leaves from the back. Light with no mirror still acts as one. Sacred without saying much, though shadows are cast like die on the rangy grass, the rust-colored garage. Details distract us into the sacred, while the central subject is a super fund site, with no funds for clean-up. Mirror logic: if millions are sick, take away their health care. In case of pandemic, stop the testing. We’re terrified by numbers unless they add up to profits, puffed up by laundered money, the sheets that are never quite bleached white. (But white’s the operative color.) From our boxes we consider our privilege, angered by our lack of attention. Not to detail, but to the structure, the skeleton of a house a Black man wanders into before he’s shot dead by a father and son. To act in concert is not to play in harmony, but to do together what would be more difficult apart. Maybe. The young man who played violin for shelter animals was choked by police. Was that the story of the boy who threw a sandwich? Or the one with a play gun? Or the man with cigarettes? Or the boy with Skittles? Martyrdom turns banality into sacred places. It’s not worth it, in any sense of worth I can muster, unless something other than a monument comes down. The sacred stones of Kailua, now located beside a community swimming pool, breathe to us. Our Indian friend says he knows what it means to hold a mountain sacred. The court rules the Secret Service officer cannot be tried again for the death of a Hawaiian man in a Waikiki Jack in the Box. Fresh off the plane, he felt threatened. Fresh off fragility mountain, we try to open our chests to what hurts us. Keep pulling. Nothing closes any more, except restaurants.

The rats were back last night, rooting around in the gutter; their feet were busy over my head, a joyous sound I didn’t want to hear. This morning, the brown cat came by again, scooting into the garage when I opened the front door. Light flickered on and off in a spider web; was it the spider who pulsed like a lighthouse? A video of thistle blossoms blowing on cement recalls an elementary school film of ping pong balls bouncing down a road, except those had comical volition. The thistle blossoms begin a story; two meet on a lonely lot, and come together for an instant, but then the story dissolves. Buddhist stories never go anywhere except through a trap door. The main events are interruptions; distractions take the cake. A man waves his AR-15, a woman her tiny pistol, at non-violent demonstrators in St. Louis. They must only eat cake in that palace of theirs; inside, there’s a wooden hiding place from the Reign of Terror. They bought it. Tragic history turned to farce and then back, though they didn’t shoot, as there was nothing to protect beyond their ears and a blade-perfect lawn. Go back and remove adjectives; they represent attachment to a single interpretation. At least pretend to detach from the Marie Antoinette story, its reenactment in the American Midwest, updated only in the citizens’ attire (pink goes with pistol; khaki with semi-automatic). Bryant tells me I liked the second half of the movie less because there was more plot, and I suspect he’s right, except even simple actions can strip it away. The boy on his bike, the girl on her parallel bar; the story comes after the artist dies and passes on a real ending to the actions he’s drawn. The girl completes her turn on the bar and leaves the movie smiling. Yet nothing happened while they scrolled through the anime drawings, watching themselves being watched by grandfather found dead on the floor. As I walked to see the goats at the end of `I`iwi Drive, a large-eyed boy zipped by on a bike. His parents said it was his first ride. When I came back, the boy had thrown his bike to the ground and screamed, frustrated by the hill. The arc of that narrative only repeats. 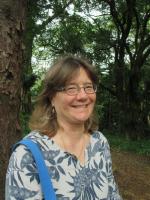 Susan M. Schultz has lived and taught in Hawai`i since 1990. She is the author and editor of several books of criticism, as well as prose poetic books, including two volumes of Dementia Blog (from Singing Horse Press) and several of Memory Cards. Her most recent books are Memory Cards: Thomas Traherne Series (Talisman), Memory Cards: Simone Weil Series (Equipage) and I Want to Write an Honest Sentence (Talisman). She is a life-long fan of the St. Louis Cardinals. Photo by Radhika Webster Schultz.