Behind iridescent masks, black wood ducks skim the lake.
No care in the world for the ibis who begs for bread crumbs,
ready to peck them from the gray squirrel on a muddy shore.
The creature pleads for more with outstretched human hands.

Under an oak, lovers share a blanket. The moon-eyed couple
need no masks to hide their young love. His gangly legs make
a shelf for her to slip and slide down for a kiss. A game they play
'til summer's end. Death comes and the boy takes his last breath.

The young girl becomes a bitter old woman. Tomorrow,
she will no longer take off her mask of spite and sorrow.

On the first day it freezes in New Orleans, a woodpecker dies. The palm-sized bird on the corner of Upperline and Perrier didn't have a chance to test out downy wings. Fuzzy feathers and a crown of red, mistaken for a cat's bite. A bloom of blood-black feathers with white bars mimics the colors of her warm scarf. The young man says, strange bird, wonder what it is. She answers woodpecker without missing a beat. He strokes his ponytail and belts out his best Woody Woodpecker imitation. He laughs at his own goofy cackle, his cheeks almost as crimson as the dead bird's crest. She doesn't mention how ridiculous he sounds. He's cute after all. His marble orbits hold the whole world, nothing like the bird's black specks. Can she recreate its last bird's eye view? She cranes her neck, but sees no sign of a nest or last cold perch. He says something so meaningless about the cold weather, she doesn't respond. Her thoughts are back with the bird, its final view of rust and golden leaves. However she nods at his scattered words because his grey eyes arrest her. How silly to pretend for a man in 2016. She knows her great grandmother—the one she knows only in pictures, outfitted in a blue feathered hat, defended her grandfather's nonsense.

Of Cork and Feathers

She named her home the bird house

but kept no birds.

The motif of cork and feathers meant

more than flying away, flitting

from city to city, taking up residence in warmer climes.

Gone one day like the whistlers who ran their last race at Audubon Park.

They flew in a wide circle, three times a blur around the same circumference.

One lucky drake left the flock, landed on a brown female, pinned her like a cat,

set her neck in place with his bill. How cliché of a spring day as he thrashed

and flailed on top of her. His orange feet disappeared beneath her feathers.

Blue sprayed the whirl of his wings.

Back in the bird house,

she says good-bye to winter, welcomes

spring like a duck cracking its head through a soft shell, newly born.

Emerging in light, she sheds her nimbus, her own mortality,

and allows the longer daylight to set her clock forward

in the only motion left for her. And like the ducks,

she is cautious of clicks and fast movements.

Fear forces her to sprint, to fly.

Only her wings are useless as a roadrunner's.

who scurries across the road seconds

before four wheels and an engine

roar past her slow wit. 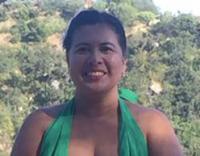 Melinda Palacio lives in Santa Barbara and New Orleans. Her books include the novel, Ocotillo Dreams, and poetry collections Folsom Lockdown and How Fire Is a Story. Her work has been featured in several journals and anthologies and online in the Academy of American Poets. Her third poetry collection, Bird Forgiveness, is forthcoming from 3: A Taos Press.