The crashing of the English canon in Spanish Harlem
Resounds like cymbals in dissonant reverb:
The path out of poverty is strewn with dead white poets,
Whose diction students strive to emulate,
Code-switching mid-block to survival-e(a)se,
To survive the gun aimed at one girl’s head
In an after-school park rumble.
School-one kids square off against school two,
Then face off the next morning in my college class,
Faces on.  Language white-washed.

That next morning’s update seems a world afar:
Mamadou will be out through tomorrow—in the hospital
after last night’s incident.
Daja is out “visiting her dad”—code for
incarcerated parent.

Drinking bad chardonnay later that evening
in my local sushi joint, ignoring
the buzz of takeout orders, I notice two puffy police
SUVs across the street, this grey
day in my white upscale uptown enclave.
What do cops occupy themselves
with here? I wonder.  Where position themselves on the
Lives That Matter continuum?

Another night, my student started talking trash
to the wrong folks gathered
on Doulaye’s block, leading to a crowd forty deep:
grown men with knives, bricks, and possibly worse.
Some ran into the school, and Security
acted, protecting the students, dispersing the clusters.

Aftermath: one was hurt.  Rumors
Are flying as Homer foretold
in The Iliad, our text that the class refuses
to settle in to discussing, awash
as they are in guffawing over social media versions
of last night, in outraged exclaiming over
how stupid their peers’ actions or accusations were.

The dean team alerts us that eight students will be out
of class indefinitely until statements are taken.
My colleague discreetly points out violations
of the law and the students’ rights
in the statement-collection process.

In the other school, the kid with the greatest
street cred—thief, liar, and pot peddler—disappears
for half an hour, then is returned to me,
and proceeds to gaily (and gayly)
enact Malvolio in Twelfth Night, with theatrical flair
and jaw-dropping insight.

I sip my chardonnay and soup,
eye my latest YA dystopian
novel greedily, and muse on dissonance.

Asheka announces that on the EFC Calculator for college expenses,
her Estimated Family Contribution comes out to $4,
her estimated Pell Grant $5800, her anticipated loan
amount about the same.  Meanwhile, the split screen
of my mind interpellates my white male fellow academic,
complaining about his under-$60K salary,
and I agree—truly—that he is underpaid.

The Italian woman at the next table mutters over the menu,
“They only have one pinot grigio?  So many chardonnays …
can’t stand chardonnay.”

Hawa’s college admissions essay contemplates her blackness
in a world that calls her white for her middle-class background,
her parents with college degrees, her hair and music and diction
inadequately ebony.  I realize that Oreo-lizing
lies akin to Orientalizing.
She worries that her musings on blackness do not contain
enough references to poverty, struggle, racism, and suffering.
That her truth is insufficiently brutal.

Fans bestir the stifling balcony air
as you invite us in for a coctél
and a joint birthday party for your wife, mother-in-law, and friend.

It’s 8 pm on a humid August night.  I am drenched from scalp to sole,
ponytail stiff with summer stifle.

We have rum, which you call Ron
as if it’s your bff, and Duro,
your father-in-law, agrees that it is.
Over the crackling of the ice cubes,
you assure us that you boil
your water before freezing it, interpreting
our slight hesitation.  A white and gold
porcelain elephant on the table catches
my eye.  You explain
that its ass must face the door,
for luck.  Feng shui cubano.

“¡Cuban a/c!” you joke, as you point to your caramel-brown
torso and gesturing the men to peel out of their shirts.
We circulate chicharrones.  When you hand me
barbecued ribs, your English falters, and you outline
your own ribs, wanting the word.
Later, as our Spanglish meanders, you mime
a pregnancy as your friend’s profession: obstetra.
Boasting that your test for prostate cancer returned negative,
you point un-self-consciously up your groin.
You then archly brag that at 63 you still need no Viagra,
and turn away doctors’ hints.  No need for finger-pointing there!

Duro’s English is nearly as good as yours—with a wink, an
undertone, and a hearty shoulder smack, he says he must keep
on his toes to catch what Americans say of his país and his people.
Knocking his head, he guffaws that friends tease him for his name,
calling him Hard-head, Donkey, Goat.

A dropped beer bottle shatters.  Shards
are collected and swept.  I marvel at the lack of fuss,
even from a living room full of doctors.  I gasp
at the blood on your shin—a three-inch red worm—but you smudge
it away with your unwashed thumb, adopt a fainting pose,
arm draped dramatically over your face.
“¡I’m dying!” you declaim in English to your
pediatrician wife.  She rolls her eyes at your cut, and gives you a kiss,
not bothering to treat it even with a clipping from the aloes.

I think about today’s American parents, alert to
every possible germ or microdisaster to befall their precious babes.

Another bottle shatters.  Someone exclaims
it must be an omen, and adds
a cigarette to the one already reposing
as an offering on the side table.
“San Lázaro,” they explain, gesturing
at the carved icon overseeing his tributes.
I pick him up to take a look, and the whole room gasps.
I replace him, abashed, and survey
his bloody wounds.  He leans on a staff, standing
on a black pedestal.  He is shirtless and about 3 inches high.

I was twenty when I entered my first American
Catholic church, evincing a Baptist-bred distaste
for the goriness of the statues.
Mexican churches were even more visceral.
In Cuba, I discover santería and syncretism,
saints and suerte in sync.  Babalú-Ayé,
sung by Ricky Ricardo to unknowing American viewers
in countless Lucy episodes, is an orisha of santería, fused
with San Lázaro, associated with healing.

The rug is strewn with crayons and superhero toys,
which we brought for the children.  El Diente, the street dog,
a brown mutt with a striking underbite, sniffs
the cerveza on the floor, and eats his supper of rice.  Summer
dusk draws itself out languidly.

The lone white candle on the cake is lit, sung to,
and blown out three times.  It wilts in the heat,
bending in a slow curve
of obeisance toward the chocolate frosting, as if it
had hands to pray and eat, as I bent to examine
Lazarus, painted wounds drawing my genuflection,
an oration of ordinary resurrection. 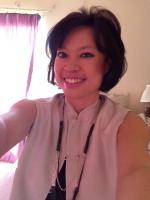 Celestine Woo is an English professor at Bard Early College in Newark, NJ. She is also a dancer and former choreographer. She has published a book of poems about modern dance (Clare Songbirds Publishing), a chapbook of poetry (Pudding House Press), as well as numerous poems in literary journals. She has published scholarly articles and a book on Shakespeare.