In loneliness twilight’s hammer wakes the small night so the great night can come in. There the alleged sleepers with one eye open are waiting in their beds, which are flowerbeds in the morning. The gardener says to the orphan boy, you have not made a friend today. I have been diligent in friend-making said the orphan, look at this glass pillow full of feathers. I have breathed on it all day to make a friend appear, but nothing like that happened, only a few words. Here’s one. He held out a grapefruit seed. That is impressive said the gardener, let me plant it in the bed and see if a dream friend grows tonight. Will it look like a tree? asked the orphan. Most everything looks like a tree if you are an orphan said the gardener. You don’t look like a tree the orphan cried. That’s because I’m not your friend said the gardener. I’m the gardener.

Where the Man Sat

It was soon determined that actual emotion had not registered which happened only when the light bulbs that lined the top of the wall blinked on and off. A severe electrical storm would simulate a tantrum. A grey man said, I used to have feelings but I kept them Underneath. Where is underneath? said the interrogator. Rain fell all through the room of people unable to feel soaking the mothballs that simulate indifference. Another grey man was caught eagerly sympathizing with his counterpart in the broken mirror. The expressions on his face matched. Through the crack in the mirror you could see the possibility of a spark. Underneath the first grey man said, after a pause, where I am sitting on something enormous. But no one looked exactly there.

A waterfall of laughter makes a near palindrome. These near palindromes, if uncovered by studious poets, undermine right thought. They enable a wildflower eruption frowned on in meditation. Some teachers prefer the long breath short breath routine. I sit on my zafu watching a cobweb grow from my nostrils. What is the web of a cob? the poet asked. Breathe, breathe. By all means ignore me the poet said into the silence. The feeling is mutual silence did not reply. In a moment of slowed down time a thread becomes a threat. Let the palindrome drone pale. Let the poem mope. We all will appeal to a death panel.

Author's Note: These prose poems are an ongoing series written under the influence of dreams, my dreams and others', and my readings of prose poems, including those of Russel Edson, Max Jacob, Arthur Rimbaud and Robert Duncan. They are from a forthcoming manuscript, tentatively titled Talking Dirty to Siri. Prose poems have appeared in my books of poetry starting with my first, The Missing Jew, through the most recent To Die Next To You. 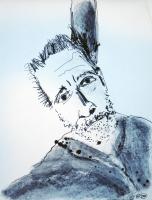 Rodger Kamenetz writes poetry and does natural dreamwork in New Orleans. He's on the faculty of the C.G. Jung Center in Evanston, Illinois. His most recent books are Yonder (Lavender Ink 2018)  and Dream Logic (PURH 2020). Other books include The History of Last Night's Dream and The Jew in the Lotus. You can find him at www.thenaturaldream.com or on Twitter @Jewinthelotus. Picture by Michael Hafftka.