When I get up in the morning first thing I do is head straight for the mirror and take a good, hard…look at that face which you’ll be staring at for the rest of the day. I see what sort of alterations need…to be made. Not with lip-gloss or eyeliner. But with will-power and attitude. Plenty of attitude. Over the last few years, I’ve developed a system of physiognomic exercises, which allows me to set my facial features in any number of staid if evocative expressions. It’s a vigorous regimen that leaves me sweating and sore from the neck up but the pay offs are incomparable. Even transcendant. The refining of this technique has been a real trial and error process, and over time the goal has changed. Initially, I perfected the deadpan look thereby ensuring no one could see inside. But an unforeseen repercussion occurred. With the hardening of the exterior came a softening of the interior. Or rather a dissipation, leaving in its wake, a remnant. Indeed, in time, all that remained of the inner life, was a small, hard kernel. The seed of an emotion. Something undeveloped. Something self-contained. Something I could manage.

It was then that it dawned on me. Appearances were irrelevant. What mattered was the dislocation between external and internal. My affect didn’t need to be flat. It only needed to be unrelated. Here was power and endless possibility. I broadened my range. I created a tragic mask that bordered on the beatific. My pain looked so profound as to be mistaken for an ecstatic state, the intensity of the expression suggesting that of exhaustion so that the line between participation and withdrawal became blurred and people were both repulsed and attracted. My comedic mask likewise was ambivalent and what first appeared as unadulterated glee looked, upon further inspection, just as easily like malice or constipation. One day, when I was sporting my tragic mask, I literally bumped into this guy I barely knew, and he gasped at seeing me and said: Girl, you are a mess. He said: Girl, if you keep going on the way you’re going you’re going to end up dead. Now I knew I was looking fine. He hadn’t a clue as to what was going on inside me, and I transformed my mask from tragic to comic so fast that his head began to spin. I switched from sad to happy in a heartbeat, and walked away self-assured. Cocky almost. I tossed my sheer pink polyester scarf over my shoulder, strutted my fine ass in my navy blue leisure suit with bell bottom flares embroidered with little white poodles wearing AIDS ribbons in their goddammed motherfucking hair. And as I walked down the street the lights in my platform heels clicked on and off and on and off so you could see the dead goldfish floating inside. Belly up. What the hell did I care what he had to say? What did he know? His “sorry” only made me turn around and flash him a face so inappropriate to the situation that he didn’t know what to think.

When I go to bed the first thing I like to do is prepare for the shower. I stare at the body in which I’ve been parading all day: the knocked knees, the pigeon toes, the clubbed foot. Actually those deformities are gone. Every grotesque physical trait I possessed as a child they braced and straightened out. Even though I resisted, they insisted. Everything must be straight. And when I got old enough to decline their purported assistance, I did. I declined. I reclined, supine, with my ankles aimed at heaven. Then behind my head as I tried to kiss the freakish part of me myself. And when I look at my body, this body that could turn on me at any second, mutate, and transmogrify, even as I speak, so that I become the latest freak victim of elephantiasis or The Alligator Boy, I sense a change happening. Something inside me is changing. Just like puberty when everything was growing by glands and follicles and a certain swelling at the risk of being crude or indiscreet.

This is my second coming. I’m going in reverse. I’m moving up by moving out. I’m aspiring to death, to nothing, to a place where the line between anonymity and fame is as thin as a hair. And it won’t wait. It’s bound to come whether I care to or not. Something besides digestion. Besides the processing of what? What? What comes out? Something came out. Something came out and I didn’t know what I was saying. I was saying something about. Something about. About. Did I hear a click? I know I didn’t see a flash, but did I hear a click? Because it’s not the flash that bothers me, it’s the click. Like a trigger or something signaling this moment is over, that we’re that much closer to we don’t even know what. Where we’re going. Who we’ll meet. Or what. And what do we do to prepare. I should have thrown my head back and laughed. Shouted. Smiled. I should have yes. I should have beamed. When the click came, I should have grinned or gnashed my teeth. Who could’ve told the difference?

I never sleep. Not since I was six. When I had this dream which for some people might have been a revelation. But frankly there was nothing unusual about it. You’ve probably heard it all before. This procession of images. I was a small light flying around in space. But there were no stars, there were no planets. There was only direction and speed. I was heading forward toward a gigantic orb which came into view. This was my destination. This glowing orb. It was bigger and brighter than anything I’d ever seen. It invited me, silently, with a gravitational pull, I found hard to resist. I felt its promise of warmth, I saw its abundance of light. But the sound. Well, there wasn’t any sound actually. It was as if sound had been obliterated by the glare. All I could hear were these words in my head. Come. Join. Come. Join. Come. Come. Cum?

No. It wasn’t a wet dream. It was a nightmare. I knew this light could eat me alive. The warmth promised was the warmth of any well-fed creature’s belly. I wasn’t even food for thought. Here was immortality at a cost. Identity consumed by eternity. I would be nothing. Not an increase in light. Not an increase in warmth. So why was it so important that I joined. I chose the dark. I forced myself awake, back to the shadows of a six year old’s room. And now I never sleep at night. I don’t want to wake to the light. I chose the dark even if it is riskier. I want a night so pitch that I can’t see my hand in front of my own face. I choose the place where you have to reach out or risk falling on your face. I’ll fall on my face. I’ll turn somersaults. I’ll dance. I’ll dance and no one will see me and that will be fine. When it’s over, I’ll be done and that will be plenty. Where’s the glory to be found in losing it all in a flash. A warm bit of nothing. I’d rather have nothing and know it. I have nothing. I have had nothing. I will have nothing. Enough said.

"Holy Shtick" is an excerpt from The Gospel According to Saint Genet, a trilogy of tales inspired by the writings of Jean Genet and commissioned by the Portland Art Museum. 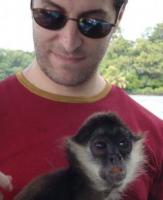 Drew Pisarra has been known to stage Gertrude Stein plays, turn Fassbinder movies into poems, and blog weekly about Korean cinema. He has toured his monologues nationwide to such venerable institutions as Dixon Place (NYC), Maryland Art Place (Baltimore), Highways (LA), Bumbershoot (Seattle) and PICA (Portland) and more recently grew a mustache to play Nietzsche in an opera by the Austrian-American composer Gisburg. His collection of short stories, Publick Spanking, was published by Future Tense eons ago.