Maybe it means nothing-
the word fading like breath
from the mouth. Open spill
like the tide, blue moving
to rivulets into lost damp sand.
In the orders of soldiers,
the dark spots of some enemy
pooled around their eyes,
the choice of throat blinks
away as exhaust, as holy light.
Maybe the word sits best
on the page, lodged
between fighting arms
of the AK, the car bomb
under the peeling hood.
In each, the fire fades, scars
the letters, pulls each syllable,
a bird from its nest, trout
from the stream, rabbit from
the den. Everything’s scream
forms the word, the sharp
tooth of F, the alert of E,
down to the crushing blow,
the jackboot, the stiff jaw,
the wooden-hollow end.

At the Hampton Inn,
I try to clean my nose,
thumb to the side, mimicking
the crowd sound as it tunnels
under the eve of the window.
The cut of the evening
pulls the buildings closer, Comcast,
City Hall, Logan, brighter.
The streetlights shift on, finding
the same purpose in shadows.
The protestors march
down Market towards City Hall,
I think “real soldiers hold signs”,
as the blood stains their breath,
forms long clouds that trail behind,
covering their tracks in a grace
long since forgotten to them.
As the mass turns the corner, I know
those next steps, sharp and short
into the song of the rusty beartrap.
I cannot see them, but I know the cops
that block the road are already ready.
Hands melted into clubs,
eyes razors and claws,
concentration as a psalm
on their lips, shields up
as self-made crusaders,
imaging the empire falls
unless they bash the head
with the dreadlocks,
the city will burn unless
the Capstun pushes past
the mask into that father’s
eyes. They need to swing
and swing, hurt for order,
do as you are told
as if humans were ever
good at listening, as if
they were ever good
at staying in one place,
at behaving.

Heather Heyer was murdered when a car driven by a nazi-fuck who plowed into a crowd of
counter-protesters during a white supremacist rally in Virginia.

At 40 miles per hour, everybody splits open.
Thighs and dreams and hands holding signs
about lives and rights and histories.

She woke up in the same light that held her killer.
She held the warm arms of change, he held back,
pulled his chest tight, and saw the chance to carnage the change.

With desperate fixed feet, he will justify and kidnap the street.
His Dodge is another long rifle. Another excuse for the foot
to pour gas over the world and torch everything in anger, flame, and steel.

She can’t rest in power when the engine
is still gunning on her chest.

At 30 miles per hour, 50% of every belief dies.
Same speed as Heather’s neighborhood cruise to the 7-11, the Vet.
But instead of cold ice-t, a happier pup,
her breath last feels like a cinderblock resting in the guts.
Black rubber slips skin right off bone and for a few seconds,
the muscles pour out a new protest. The screams go brakeless.

At 20 miles per hour, her body would have died
at a smaller rate. Maybe the impact is on the meat midsection,
and instead, she is angled up and over the hood,
arm glancing off the windshield in eagle cry snap.
This is a broken a mother can handle. The falling halo
of humanity hammers in the trunk, an insect’s thud. 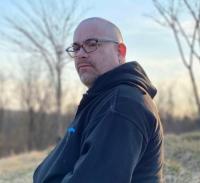 C.L. Liedekev is a confirmed poet who lives in Conshohocken, PA, with his real name, wife, and children. He attended most of his life in a Southern chunk of New Jersey. His work has been published in such places as Humana Obscura, Red Fez, MacQueen's, Hare’s Paw, and River Heron Review, amongst others. His poem, “November Snow. Philadelphia Children’s Hospital,” is a finalist for 2021 Best of the Net. C.L. recommends Be the Match.