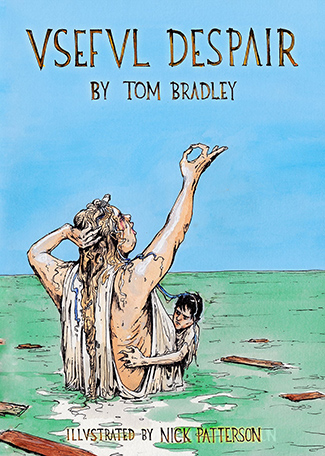 From the tambourine I have eaten.
From the cymbal I have drunk.
I have borne the cup of gonads.
The room I have entered.
--Firmicus Maternus

Upon the scrotum's fell evacuation
the musculature normally declines--
or so the common wisdom of our time
lets one (that would be me) anticipate.
But here I feel a pair of muscles thrive
on my castrated travel-partner's sides:
handholds for me, lifesaving, living flexures
of human, if not more-than-human steak,
eliciting surprise but no complaint.

Like most life-residents of our hilled city,
I'm unenthused by water mixed with salt,
especially when sloshed in large amounts.
Just as a blinded Greekling house cat yowls
if bucketed with brine, so do I cringe
from seas, though they be balmy and becalmed
as this, in which we're presently adrift.

When fishy damp received our shipwrecked party,
I, panicking, dug fists in said companion:
emergency suspension of hands-off,
the policy that governs my behaviors
with Spado.

That's the òbese eunuch's name--
and, no, we are not lovers, he and I.
(Pronouns of gender-specificity
are plied advisedly in this account.)

I'm being too dramatic: no "shipwreck,"
to speak precisely, nor so much as "ship."
Our boat, doldrummed, spontaneously split
at seams, or joints--however those are named--
for reasons we mere lubbers of the pavement
can never know.

Our craft dissolved, I lost
no time deciding we were good as dead,
so reached for Spado by unbrained reflex:
a valedictory grope (you might imply),
expecting hands to gain no firmer purchase
than revelers will find, who un-recline
too quickly at posh banquets, swoon face-first
among Equestrians, Falernian-soused,
and on sebaceous flanks of roasted sows
must break their falls.

But, paradoxically,
beneath the rolls and rolls of gelding pudge
I'm palpating my matched salvation-grips:
thews hard as, with reluctance, I recall
a certain skull to've been, peeled dome of bone
belonging (at least rightfully) to her,
the crone who furnished Spado's new hairdo
eternities ago, when our six soles
still knew the blessed touch of Terra Mater--
at any rate the dreck that winds up wedged
'twixt sandal straps in weird Illyria.
(Don't ask why we were there.)

Exaggerator for effect, that's me:
transsexed rib-woven sinews can't be hard
as barbarous beldams' flint-flayed crania.
But anything that palms remotely firm
seems adamantine when one cannot swim,
and gasps conniptions, liquid to the chin,
solidity unhailed from rim to brim.

At leisured pace, in nautic gauze, Nemèsis
enwrapped us. Spado, gradually, with me
attached, into the watered part of Mundus,
one toe by temperàture-testing toe,
eased us. Soothed bathtime baby-plashy boy,
he blubbed. Such circumstances pose few qualms
for suckling whales.

For me it's sickly-warm,
as one imagines amniotic sauce
to be, or maybe recollects it as.
Existence dragged beyond the edge of surfeit
this time around, I balk to get re-sucked
into the crumby syrup of the womb.

The sky is paralyzed, an intimation
of rigor mortis bricked beneath a vault,
with naught by way of meteorology
to euthanize me, nor to kill our boat.
Nevertheless, disintegrate it must,
efficiently as Nero's mother's did
on sly Minerva's recent owlèd Feast,
her last, almost, not quite. No thanks are due
to matricidal offspring's scuttling.

Thoughts
of such a glamoured dame summarily dunked
in this identical predicament
inspire our Bathing Beauteousness to mount
operatics of a genre, in all times
and climes affected by the neutered class:

Observing, from beneath disdainful lids,
my seizures, in contralto she intones--

Do cleave, if you must, to our sacrosanct person.
This boon you crave's granted by grand Agrippina.
But ride us with dignitas, virile discretion,
you citizen-nursling of Roma Aeterna.

Useful Despair as Taught to the Hemorrhaging Slave of an Obese Eunuch is forthcoming from MadHat Press.

Tom Bradley has published twenty-five volumes of fiction, essays, screenplays and poetry with houses in the USA, England, Canada and Japan. Various of his novels have been nominated for the Editor's Book Award, the New York University Bobst Prize, and the AWP Series. 3:AM Magazine in Paris gave him their Nonfiction Book of the Year Award in 2007 and 2009.

His journalism and criticism have appeared in such publications as Salon.com, and are frequently featured in Arts & Letters Daily. Further curiosity can be satisfied at tombradley.org.