Endless deficiencies exposed, features that exemplify America: gruff,
grub-hungry, godforsaken, hateful and hated. In fits of childish
impertinence, not great, but intransient and irrelevant as the Raj,
knick-knack of another know-it-all empire totally out of control.
Millstones of manipulations and massacres, masses dragged down:
our turn now—the mad gyre spirals out of control and cannot stop.
Quantum leaps cannot come from quagmires. Hear the whimper?
Subjugation, inequality, oppression: things have fallen apart.
Unable to untruth the sucking sounds of mud and muck, TV
warnings of fake news unwelcome. The whole world views FOX
yahoos, the yellow journalism of yes-men, the little whizzer of Oz,
anachronistic at last, briefer than most empires of lies. The power grab
ceases as such dominance does, the concept of America aborted and dead.

Great? Great at grift, at graft, at grabbing. Great at skewering truth.
Insults drip from his blowhole like gibberish from the lips of Nicki Minaj.
Korea loves him, the Kremlin too. Let’s not leave out the KKK. A tool
managed by masters of manipulation, their trained monkey on a chain,
organ-grinding, self-proclaimed genius who’s great at playing a chump.
Qualified for nothing, this quintessential con blackens the pot to char,
serves the burnt offerings to his base, trumpets he’s great, the best,
ultimately on par with the Almighty, this piddling peddler of perv.
Whimsy and wheedling are his favored ways for whatever (eww, sex).
Yammering endlessly, this boorish yahoo, all fizzle and no fizz,
angry, belligerent (and so on down the alphabet), babbles in bafflegab,
considers brief tweets to convey deep ideas. America, haven’t we been grated
enough? The country’s in shreds, on edge—please, not one more empty huff!

Idolatry of idiots, worship of insanity, pseudo-Christian imitation as off-kilter as J.
Krew clothing at a flea market. It’s a Bible, he yelps, and we wonder from which hotel.
Millions of minions see a Second Coming, and we wonder how the Book doesn’t burn
oiled by his depraved paws. But the populace of fundamentalists continues to worship,
quadruple-down their adoration. He quickly retweets a meme from Twitter,
stating he has done more for Christianity than Jesus, he is in fact heaven sent,
uh, and Jesus loves him better than Obama. Who needs proof? Lying, his leitmotiv,
wide of wisdom, of what we’ve viewed on TV with our own eyes: the flummox,
yawning gaps in plausibility (revised on whim by the hour), the relentless blitz
against common sense—yet still the support of church-going masses fails to ebb.
Contributions keep coming from right-wing wingnuts and televangelists. Despite all said,
excuses continue to be made. And we wonder, are most Americans blind and deaf?
George Orwell was regrettably prescient when he argued Ignorance Is Strength. 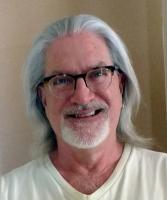 Scott Wiggerman is the author of three books of poetry, Leaf and Beak: Sonnets, Presence, and Vegetables and Other Relationships; and the editor of several volumes, including Wingbeats: Exercises & Practice in Poetry, Bearing the Mask, and 22 Poems and a Prayer for El Paso. Poems have appeared recently in Gyroscope Review, Unlost, Shot Glass Journal, San Pedro River Review, and Ted Kooser's American Life in Poetry column. His website is http://swig.tripod.com. Scott recommends Lambda Legal.