It was late in the day when Jason woke up. I heard him moving around in the downstairs bedroom and I went down to awkwardly hang out in the kitchen, trying not to look like I was just waiting for him to come out. The wooden door opened with a jerk and Jason emerged from the dark room alive and fully dressed, jacket on, gym bag over his shoulder, ready to leave.

His face was flush, his normal peach undertone to his pale skin was bluish and washed out. His eyes red. He moved stiff; shoulders pulled forward.

“Hey so I should go,” he said, coughing, “get on the road before the next wave hits.”

“Okay,” I said, I was standing diagonal to him, my back to the stairs, between him and the front door. “I mean,” my chest creaked, “do what you want, what you think is best, but you don’t—”

Jason shook his head fast, a hard No. He took a long breath in through his nose, taking small steps, I stepped aside for him to pass. His back to me, he said, “I appreciate what you’re doing, what you did, what you were thinking. But I can’t leave now. It has its hooks in me. I have to go back.”

Like that, the seed of my dream was mashed. Jason was going to go back to Cape Cod, the place that had been so bad to him, the place that almost killed him, multiple times, but also wouldn’t let him go. Our friendship remained unfinished, may now never be fulfilled. I didn’t know what would happen to him, he had fought so hard to get better, but nothing was certain. I worried what Cape Cod could do if he stayed there. If he could survive.

Jason opened the front door and went down the concrete steps one at a time. The sky had cleared of the clouds, the sun a diffuse golden rust breaking apart above the horizon, above the trees and the two-and-three-story brick buildings of my city in miniature. Jason looked at me over his shoulder standing in the doorway, his skin becoming flesh for a moment in the glare of sunset. He loped over to where his car was in the unpaved gravel lot beside my apartment. Jason put up a hand goodbye after he turned the Nissan on. I held up a hand goodbye to him and stepped inside. I heard his car whip around in the gravel lot, rumble down my street and away, driving all the way back to Cape Cod, the place I could no longer be, and he could no longer leave. The place that wouldn’t allow either of us to live. 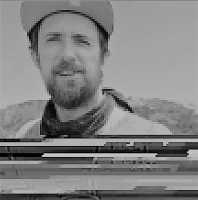