My mother named me Judy, after St. Jude, the patron saint of lost causes. My sisters called me ‘Calamity Judy’; and Dad, well . . . he was a plumber, he called me ‘Biffy Diffy’ or ‘Absent-minded Professor’. In 1986, I was a fifth-year medical student completing a six-week practicum at Welkom Gold Mine hospital when the miners gave me my African name: Dr. Kipla Broek.

I was no stranger to the mines. Dad had worked as a plumber there and during my vacations, I’d stitched lacerations and treated pneumonias and various other maladies at the mine medical station. I was thrilled when the hospital superintendent offered me a temporary job at the hospital, and surprised when it came with a decent salary.

Weeks into my thrilling temporary post, I made my way past the medical and surgical wards to the outpatient department, my Adidas squelching on worn yellow linoleum. The smell of disinfectant leached from the walls. I pushed open the double wooden doors and entered the large hall where forty men waited on rows of wooden benches harder than church pews. They hooted and hollered when they saw me. “Dr. Kipla Broek!”

Four women sitting at the far end of the front row shook as they laughed.

I recognized the words spoken in Fanagalo. Fanagalo was the language the miners used. A mixture of Afrikaans, English, and Zulu. A common language to improve communication amongst the migrant labourers who came from all over, even Malawi and Mozambique.

“Did they just call me Dr. Kipla Broek?” My voice was only a few decibels below a foghorn, but here it didn’t matter. In Zulu culture, whispering was considered rude.

I grinned sheepishly at my new title, Dr. Take-off-your-pants.

He was still laughing as he opened the door to the small examining room. There was no time to waste. I had two hours to treat all the patients before ward rounds at nine.

The first person to enter was a young woman, my age, in her early twenties. She wore a bright blue doek over her curly hair, the knot tucked at the base of her long neck, a colorful loose top over a black T shirt, and a shiny red and blue skirt. She lay on the bed and I covered her with a sheet. I would have preferred a screen, but there wasn’t place for one. Elliot moved discretely to the furthest corner of the room.

We didn’t have time to complete much of a medical history, but I knew she was a sex worker and soon I’d be treating her customers. After my examination, I gave her a prescription to take to our pharmacy. Elliot handed her condoms on her way out. She laughed and said something in Sotho.

“What did she say?” I asked once she’d left. He spoke six languages.

“Her customers refuse to wear the white man’s rain jackets. They take away too much sensation.”

After I’d examined the fourth woman, I asked him, “Wouldn’t they prefer to go to Thabong hospital?” I felt guilty performing such a rushed examination and reasoned they were likely to receive better care at the local segregated hospital outside of Welkom.

“The doctors there, they see too many patients. They don’t perform proper examinations and they often run out of medicine.” He didn’t wait for me to respond. He opened the door. “Buya lapa,” he yelled at the men and the first one hurried in.

He was a young dark brown man, with closely cropped curly hair, a slim body and wiry muscles. He walked to the side of my desk.

I wheeled my chair over, keeping the desk between me and the patient. “Kipla broek.” I couldn’t help grinning thinking of my new nickname.

He unbuttoned his fly, and whipped out his penis, white mucus dripping from the end.

“Ew!” I complained as I wrote out a prescription. “Put it away.”

He laughed, ignored the proffered condoms, and joined the waiting men and their yells of “Ukufa kwa bafazi?” Syphilis would mean a series of painful Penicillin injections.

“Aikona. Jovella!” I heard the man cheerily report his diagnosis of gonorrhoea, one requiring only pills for treatment.

Time sped past as one infected man after another filed into the room, presenting with the contagion of apartheid, virile men forced to live in crowded hostels, away from their wives, children, families, all for monthly earnings half that of white men working easier jobs. We didn’t know then just how deadly their occupation had become.

Later, at lunch, comfortable in an armchair in the doctor’s lounge, I chewed my sandwich while my white male colleagues chatted in Afrikaans. They’d qualified at Bloemfontein University, the conservative Afrikaans university in the heart of the Orange Free State—the least free state of South Africa. Black students were banned from studying at Bloemfontein, the birthplace of apartheid. Instead they attended Medunsa, or Fort Hare, as Rolihlahla Mandela, dubbed Nelson by his white teachers, had done.

The University of the Witwatersrand, land of ridges and white water, where I studied, was in the wealthiest square mile in Africa. South Africa’s wealth had come at the expense of black men sweating in the stopes, bent over in low tunnels as they dug up gold. Some of these miners’ beating hearts now pumped HIV infected blood through their veins, each beat counting down the seconds, minutes, hours, days, months, years, before the plague would reveal itself.

On my way home that night, I passed the sulphur yellow mine dumps blowing dust over the veld towards the sprawling township of Thabong and the single-sex hostels further away. I thought of the men who braved steel cages that sank kilometers down dark tunnels, down the shafts of one of the deepest mines in the world.

These men, like Elliot, like our future president, and millions more, had had their names taken from them because they were too difficult for white men to pronounce.

These men had given me my name: Dr. Kipla Broek. 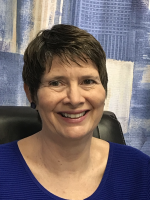 Judy Dercksen is a family doctor, pain and PTSD consultant, and provincial family physician for British Columbia's ECHO for pain. She’s also been published in medical journals, The Tyee, Vancouver Sun, Emerge 2020, 101 Words and Piker Press. Her website is https://painimprovement.com. Judy recommends Pain BC as her charity of choice.