to let the tourists cross. In front of him,
an old haole woman trips over the curb,
falls and is picked up, nose streaming red.

He stops to help. I’m okeh, she insists,
fending off concern, is feyn, von't go
to the hospital. Finally, he quiets her down,

offers a ride back to her hotel.
The other strangers, too relieved to do more than ask
Are you sure? heave his battered guitar case

to the back, help her in. They fasten her seat belt,
leave her an extra tissue, to wipe her nose, or wave for help.
She wears a heavy black cardigan (in this heat),

of urine. She doesn't like the way he drives,
tells him so in her heavy Yiddish accent, complains
about his car (strewn with clothes, sheet music).
It’s schmutzik, she says,
How ken you drive in such a pig-shty?

I ken’t believe…they let you verk
in that outlandish get-up?

She answers wryly: I've a bischen tattoo myself, more
of the numeric sort. But you don’t see me
goink around showing et off.

Doan’ you believe in art?

Deutsches Jungvolk, sang folk songs vile they tied
shut the sack. It all comes down to death, you know.
Life, pah! Life’s just the trashing as ve die.

He can almost see the skull of Lono,
god of war and death beneath her made-up face.

Auntie, you seen too much sad t’ing.
Dey tried to wipe us out  too – spread
hymns and smallpox for to save us.

My Phillipina tutu-lady worked da cane fields,
always da sharp edges,  threat of getting sent back home.
She marry a local who raise pigs. Dey made do –

Make us stronger. We Hawaiians still be here
wen dey hotels be rubble. Back in the day
mongoose brought here to kill rats, but

they doan like nighttime when rats out.
Like mongoose, we doan do what we s'posed to,
even now. S'posed to play ukulele sweet,

make so tourists say Aaaaaah. But I
amp it up, play Bob Marley, Lectric Ska.

All our songs and stories did
vas teach us how to die, vich prayer
to bleat on the vay to the butcha.

Death not de worst ting. De worst
is lose your family’s mana. My tutu
used to say “De ancestors, we carry dem
on our backs; sometimes dey carry us.”

Art drives on through the moist tropical night,
exhaust curling behind.

A Disputation is a genre of writing from the Ancient Near East in which two abstract concepts or inanimate objects are personified and argue over who is the best, the most valuable, etc.. Sumerian examples include “Debate between bird and fish”, “Debate between silver and mighty copper”, and “Debate between Summer and Winter”.  In Judeo-Christian traditions, portions of disputations are found in the Apocrypha (e.g., Deutero-Isaiah), and in the Talmud. (Source: www.wikipedia.com)

Schmutzik-- Yiddish for filthy
Haole-- Hawaiian for a person of white skin color
Bischen-- Yiddish for little
Deutsches Jungvolk-- Nazi Youth
tutu-lady, tutu-- grandmother, grandfather
kapu-- Hawaiian for taboo.
“The ancestors, we carry them…” is  a quote from Jacqueline ‘Skylark’ Rossetti, radio host.  I modified it to render it into Hawaiian pidgin English.
“Hope gives a man strength but no sense.” -- A Yiddish proverb, listed on a number of web sites.

she says over the phone,
clacking in her heels towards the restaurant.
Stood me up one more time, I swear

Sitting down, a sip of Perrier,
she continues Seven million tons
of buffalo tongue shipped out of Dodge,

the rhinoceros Rajah of Visingyar sent
to Phillip II, the felt tent city of the great Khan,
chained captives on Titus’ arch.

One of those juggernauts, she adds, waving
her arms to clear smoke from the next table,
carton of cigarettes, endometriosis, my gulag.

A Coin can Be Anything

i. Photograph of a Palestinian Girl

On a mat, she lies, tired from dancing,
left arm flung back over her head.
Her young beauty is swathed in gauze,

hands stained  with henna as if
she grabbed a rusty bench,  a deep red current,

with both hands.  You and your camera
sit at her feet as if she were simply—river.

Dark hairs above her lips are exposed
by  your lens. Behind this photo
looms a large volume of Western art.

A coin bought your admission, your presence,
keeps her eyes closed, keeps her voice silent
as if she were dead.

ii. A Passage from the Scroll of the Present

Kore reclines on the same reed mats
within Her Temple. Though hungry,

she hasn’t eaten the pomegranate, just torn it
to pieces with nervous fingers.  Still maiden,
she waits to return above ground.

New shoots sprout out of her fingertips’ red marrow.
Wind and water toss her young limbs.
….Kore’s dance is interrupted
by the appearance of a large squash god.

(In the Romantic text, God is a dead vegetable.)
She ate two seeds of his marrow,
bore twin heroes.

At age nine, they were shot for throwing stones at soldiers.

Once, in a park behind the State Capitol,
someone took pictures up my skirt.
On my lunch hour, I lay in the warm grass,
soaking up some sun.  When I sat up,
a man approached and told me about the voyeur.

He watched me be ashamed.

As if I were fruit, an eggplant in the market, bruised
by avid eyes.  As if shame were a form of currency
devaluation.  I thanked him.  I should have said

He was probably the one who took the pictures.

I should have torn out his heart.

Long scratches on the cooler’s metal lid.
Perfect cold from its dry concavity.
The passive green bottle, emerging, frosted:
how easily a coin can bring her to you. 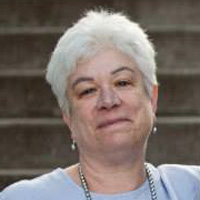 Roberta Feins received her MFA in poetry from New England College, where she studied with Judith Hall, DA Powell, Carol Frost and Alicia Ostriker.  Her poems have been published in Five AM, Antioch Review, The Cortland Review and The Gettysburg Review, among others.  Her chapbook Something Like a River, was published by Moon Path Press in 2013, and Herald won the 2016 Coal Hill Review Chapbook Contest, and will be published by Autumn House Press in 2017. Roberta edits the e-zine Switched On Gutenberg.