by Cornelius A. Sasquatch

It is with a heavy heart, shame, and a plea for forgiveness that I impart the following tale.

Long ago in the pacific northwest, in a forest I frequent to people watch, I came across a handsome young hiker.  To my delight and surprise, he was unaffected by presence and if anything was delighted himself to make my acquaintance.  After a few moments of cautiously inspecting each other, we simultaneously raised our hands in greetings which caused us both to chuckle.

The tension broken; we began to speak.  As we talked, we strolled to a nearby creek and both of us perched upon a large glacial erratic.  Here we shared ideas, beef jerky and some trail mix (as well as a bottle of wine the hiker had been courteous enough to pack).  Through this exchange I learned the hiker was recording artist who was obsessed with the work of Jacques Brel and had to the forest for clarity, perspective, and inspiration.

The young artist was very charismatic and easy to talk with. So, our conversation encompassed a myriad of topics: music, art, nature, why humans are nearsighted and stupid (despite his species affiliation), Why chocolate, wine and cigarettes are the most important contributions humanity has given earth, and ultimately, poetry.

Upon this topic, poetry, my companion locked and began to pick my brain.  As I had been writing for years prior and by happenstance had a new protégé, I was more than happy to discuss the finer points.  He, at this point, had taken out a notebook and was quickly scribing my every word, exclaiming at one point that his stagnation was broken!  He believed that though he was musician by profession that embarking on a journey into this new medium would induce further creativity.  Now, given my own adventures in various forms of media (I particularly enjoy performing Dada sound poetry at night near summer camps) who was I to hinder another?

At dusk, we said our farewells.

A decade later, strolling through the same stretch of woodland, I came upon an empty camp.  I realize this is bad form and often frowned upon, but curiosity implores that I must.  So, I began to rummage through the unguarded packs searching for treats and trinkets.  My clandestine search procured the following, 3 packs of smokes, a deck of cards, a bottle of scotch and small hardcover book of poetry.  Given my love and voracious appetite for literature I began to devour the contents of the small book on the spot!  But quickly, my hunger turned to complete disgust as my eyes were steeped in the thick smarmy, schmaltzy syrup of pop-culture platitudes.  Further, this disgust turned to abject terror, my eyes wide with the realization of who created this abomination: my young hiker!  As quickly as I could, I committed this tome of eldritch horror to the flames of the campfire, and it burned blue and green and sang in high pitched sugary nothings!

I, Cornelius A. Sasquatch, have unwittingly, in my naïve ignorance, unleashed a curse.  An unspeakable Evil upon our world! This Evil, it has a name:

With my sincerest of apologies,
-Sassy
(Cornelius A. Sasquatch, 2021) 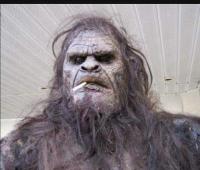 Sasquatch (Mr. Cornelius  A.) has been a resident of Washington State for over one hundred years and his hobbies include writing, drinking and collecting old vintage pornography. He is the author of the widely acclaimed book Hair Styles For Humans and his philosophical essay Should We Eat Humans? He currently lives in the woods where he chain smokes cigarettes and types.