"Born Into" and "Steadfast"

born into a palace of which one could not rule. an unsuited / unsuitable kingdom too foreign in its naked territory to be adjusted to one.  to one who has known barrenness but could never lay bare questions nor convictions.

of ‘he,’ one would have preferred to continue towards helios instead of heir. and if in this world there was more air to explain the differences between convex and concave, maybe a better perspective could have been made out of what eyes gave to one.

upon a thorn
may a briar be known

in blood spilled, a boundary
lost

speak out in ellipsis

a plate formed
if not singular

the plus side of waking up. clocks split among the words of AM and PM’s crimes and the disparity in what each is / was paid.

photons caught up in missed connections of the subway’s sway. what kind of city is this where one line goes one way and another line elsewhere and another line with three possible points, another for foul shots, another for out of bounds? where telephones have lost some of their lines? where bodies come in types instead of fonts?

went on trial with water as a lawyer
a jury of tears and a judge salivating
is a period an ark? a comma, a tugboat?
what’s a pause supposed to do?

forget it. let’s lose this image. find a new idea. let’s feed an ego and starve an id. or is it the other way around? well one thing is for certain, you can either go with the super or be left with the bespectacled. either way, there’s some kryptonite to fear and lead that can’t be seen through.

and who’s here become real from between the dreams? which word is more than a maybe in a throat close enough to be more than a thought?

what was meant was saved for another cloudy day but the rain spent the down payment on trying out some other shadow only heard of downtown where the cars can’t idle long and business gets done by deadlines. where each drop is jealous of an agenda, schedule, budget.

to know is all that’s left in old age. can’t there be a little something for the time put in? what’s been outlasted? let’s do-si-do down the night too deep in untruths shed from the skin of exchanges –quid pro quo– and asking for a résumé before ever even meeting. meanwhile, nature never carries a CV and its promises aren’t binding. so, a dalliance, a dance card punched. a mere flirt with the hours blindly surviving through hysterical imperatives - categorical, logged and loaded.

when the familiar is both the gallows and gavel, try to remember what was presented in first conversation. tied to discussion, concepts are in cuffs but not submitting, not confessing.

born too late for the Layla and Qais kind of charade but arriving just in time to come out another sort of Majnun ready to carve stone down to stanzas just for . . . the separation of time that kept narration from the moment prior to memory. the expanse that kept the bay at work in accepting an oceanic distance – docked. long live the brief fixed posture.

took the stand
made a mirror
of a verdict 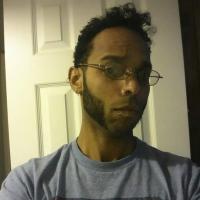 Kenning JP Garcia is the author of This Sentimental Education, ROBOT and Yawning on the Sands. They are originally from Brooklyn but currently reside in Albany, New York. They have a degree in linguistics and spent a dozen years as a cook. Now, they spend their nights putting boxes on shelves and their days reading comic books and writing poetry.