Once there was a girl and her name was Bookworm. She lived in a 1970s split-level in the Township of Toms River, New Jersey with her mom, Horsetail, and her sisters Hairbrush, Chocolate, and Mousetrap.

In the morning before school, while her mother and sisters discussed the topics of the day such as gluten (against it), the Ice Bucket Challenge (for it), and the growing number of civilians being shot by law enforcement professionals (for it), Bookworm read the Cheerios box.

Do your kids know how to make good decisions? To help your children develop good judgment, allow them to make simple decisions at an early age.

But Bookworm didn’t limit herself to the parts of the box that read like a story; she read the list of ingredients and the Daily Values, too. In fact, she read everything. Then she started over.

When she’d read it all twice, she moved on to the milk carton. Then the uneaten half of the banana. That didn’t take long, since it only contained three words and some numbers: Dole 41 Honduras BANANA #4011.

On weekends, Bookworm read many other things besides food packaging. She read books and periodicals. She read letters and shopping lists. She read tweets and status updates. She didn’t particularly enjoy newspapers, but sometimes she read them, too.

When she’d read for so long that her eyes were tired and her other muscles ached from inertia, she’d go for a walk. She roamed the residential streets of the Township of Toms River, looking at the houses and wondering about the people who lived in them. Sometimes she walked on the bike path, thinking about what it would be like if she could sing like Edie Brickell and play the banjo, or if she had wings and a bionic arm.

Occasionally, she felt the need to talk to someone. Then, since she hadn’t found any worthwhile conversationalists within her family, she went next door, where her friend Picante lived.

Picante talked a lot about BMX bikes and other things Bookworm didn’t really understand, but since she found his worldview sympathetic, she was willing to indulge him a little.

One Saturday, Bookworm was in the kitchen perusing the Lender’s Bagels bag when her sisters burst into the room, all atwitter.

“Bookworm, did you hear!” Chocolate asked. “Prince Harry is coming to Toms River!”

“Prince Harry! You know, the British dude! The cute one!”

“Whatever,” Chocolate said, turning away.

Bookworm experienced a pang. Chocolate was her favorite sister. Beyond that, she felt some actual curiosity unfurling within her, which didn’t happen very often when her sisters spoke. “Why is he coming here?”

“He’s finally realized he’s destined to marry an American girl!” Hairbrush exclaimed. “We love him much more than those silly British twits!”

“He wants a wife with decent teeth!” Mousetrap added.

Bookworm felt a little sad then, as she always did when faced with clichés. “B’hatzlacha to him,” she said, turning back to her bagel wrapper.

Bookworm looked up again. Her mother had entered the room.

“You have to go to the ball with us! The Prince expects all eligible American Bachelorettes to be there. He’s going to visit every township and hamlet and village in the land, searching for his bride.”

“What about unincorporated communities?”

“I don’t care. Not this time. We’re doing this as a family. After all I’ve done for you, this is one thing you can do for me! There’s going to be a dance contest, a costume competition, and a structured interview. Maybe you’ll do okay at the interview part. Sometimes you manage to say something witty.”

Bookworm pictured what the ball would be like. Lots of small talk and endlessly repeated phrases. The heavy smells of hairspray and makeup. A herd-level anxiety seeping through the cavernous room, eventually gripping everyone in its clutches.

“I don’t think so,” Bookworm said.

And so she stayed home and reread Watership Down while her family went to the ball, which appeared the following month on reality TV.

And everyone enjoyed herself, each in her own way. 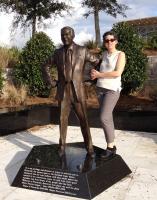 Dawn Corrigan's poetry and prose have appeared widely in print and online. Her masthead credits include Western Humanities Review, Girls with Insurance, and Otis Nebula, where she currently serves as assistant editor. She works in the affordable housing industry and lives in Myrtle Grove, Florida. Dawn recommends the Open Books Prison Books Project.