"Beleaguered by the Random," "Righteous Anger," and "Cohabitation"

Beleaguered by the Random

That is where the rub comes in:
Every day does not always reveal
The same officials.  Do not
Be misled by the uniforms.
The man tries to park his cart
Filled with his eager melons
Each potentially laden morning
Out of the way
And some mornings he is successful.

The day’s official looks at the melon vendor’s
Pristine paperwork and nods or points
To another bleak spot along the street.
The cart moves like mercury in a bottle
Whenever the vendor has to move it.

And the week after that when
He has the license to sell children?
Will it be the same set of officials?
Do they have the skills needed
For all wares?  Is out of the way
A similar quality no matter what is being sold?

He smiles at the official as the official
With a blank face approaches.  The day opens less
With possibilities than with likelihoods.
He or the official points to the melons
And nods.  It does not matter which one.

The congress of old men
And incomplete women collected
In the downtown theater that
Had once been a vaudeville house,
But had then been repurposed
As a movie house, which later
In hard times became a porn palace --
But even that failed to save it
And the city took it over for arts
Presentations and civic affairs,
Like this congress. Gaveled into
Order, the congress shared that quite
A few boys had shown an interest
In Natalie, and other boys had
Taken an interest in other girls
Like Natalie, to be collectively known
For the purpose of the congress by the
Representative specimen, Natalie.  Now
The congress knew this was more
Or less normal, but there had to be
Rules.  So the congress began to ponder
What about Natalie could be outlawed.
If Natalie could provoke such interest
There had to be consequences, Natalie’s
Fault or not.  Ways of avoiding
The consequences had to be outlawed, too.
As for boys, well, they were just
Following nature.

Because you are in a hurry
You are forced to ride the elevator
With the man from three floors up
Who you have seen staring at you
When you leave by the common exit.

As soon as the doors close
You imagine him staring at the back
Of you, imagining the autocracy of your hair,
His mind racing from your elbows
To your knees.  You are thinking

Only four floors.  Then the doors
Open and you both sprint for
The hallway.  For a moment
You see the terror in his averted
Eyes, begin to shift your assessment
Of what he might have imagined in this
Introductory, breathless elevator drop.

A week later, you watching him
Watching you becomes a game
Other neighbors are taking bets on.
You cannot remember why that day
At the elevator you were in such a hurry. 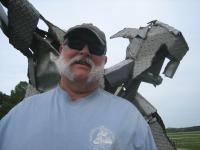