"American Haiku from the River and a Title Near the End," "UPTOWN : UNTITLED," and "The Four A.M. Shift"

American Haiku from the River and a Title Near the End

A snail has been stuck on our front door for weeks.
Heavy rain came pouring down last night

— opening the door in the morning a snail slimes away.

Small brown bird with mouthful of twigs lands on bush.
I sit in porch chair, smoking, drinking, and watching the bird

The possum came out of nowhere in the middle of the night.
It walked across our garden and stuck its nose in an empty vase

— I took multiple photos. It didn’t look my way once.

Late Afternoon Shadows and Other Observations

— I got over my frustration, and did laundry instead.

Its black, white and yellow coloring still held life even with its dead silence

Wishing I could fly

Healing with the Monterrey Bay
Peaceful paisanos jug their wine

A squirrel dips its head into the vase to sip water with its beady black eye on me:

from one animal to another, I close my eyes to let it know, it’s okay…

“When Daddy told me what happened, I couldn’t believe what he had just said.”

The ducks the ducks

They quack and quack

And no good luck

The ducks the ducks

The birds the birds

The birds singing and ringing

They remind me to sing, whistle, and dance

Help is just one letter away from Hell

The sunshine on my dick feels so strange

It started to softly rain.

He was walking around the perimeter of the Sheep’s Meadow
Peddling fragrant sticky Mexican ganja.

This is when ganja was still highly illegal.

For I had learned at 17 yrs-old after spending several nights in jail
By the Brooklyn Bridge after scoring some in Greenwich Village.

But, that didn’t stop me as I bought three dime bags
From Frank Lima and then brought them home to 14 East 90th Street.

There’s a possum in the street

Coffee under a black sky

Lampposts glowing on the bridge
I walk to work each morning

Low tide estuary below
In the river by the sea

A before dawn forecast
The orange stray cat wallows

When a raccoon reminds me
To keep my hand on my knife. 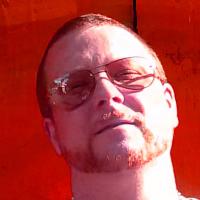 Jonathan Hayes lives by the San Lorenzo River in Santa Cruz, California where he breaks down grocery pallets at Trader Joe's, also by the river. His new book, Ghetto Sunshine, poems, 1997 - 2021, is forthcoming.