Let us make a barricade against the light; let us let no more light in.
We have enough light; we do not need more light.
We will not recognize this country when it is swarming with light.

Of course, we know personally some light we like: good light,
Light that doesn’t put on airs, that shows up on time, leaves when we like.
Light we’ve come to consider part of the family,
Light that has even accompanied us on holidays and kept the children busy.
Light that soothes, that flatters, that strokes our faces with girlish admiration.
Light that is quite beautiful, really.
But these are the exceptions,
As is the light that is vital to our economy,
Occupied in our gardens and greenhouses, on our farms and pastures.
This light has a future here.
So does the light doing valuable work for tourism, film, photography, technology,
And the metabolization of vitamin D.
All of this light is light that can stay.
Let us simply note its shadows in a registry,
So we know where it can be found at all times
And watch it closely when it visits our cities.

The problem, as we all know, is the light that is incorrigible:
The light that walks right in like it owns the place,
An entitled refugee.
This light is not like light used to be;
It is of a poorer quality
Than the light of our fathers and forefathers.
I’m talking about the light that insists it came first and is therefore in some way superior to us;
The light that is partly responsible for growing all the coca and hashish flooding our borders;
The light that aids and abets in violent crimes;
The light that is already in jail;
The light that steals in through our windows, putting its fingers on everything, lingering over our best jewelry
(Taking nothing as yet, but manifestly making a manifest, planning a theft);
The light that does not pay taxes and never has;
The light that has child after child: multiplying flecks upon flickers, glints upon glisters,
And has such undesirable relations as the fire and the drought;
The light that is homeless and vagabond;
The light that burns our children’s faces;
The light to which our heedless, oiled, bare-skinned daughters and sisters prostrate themselves, lying prone or supine under it;
The light that will not bother to learn our language;
The light that we can see in our rearview mirrors, following us, as if we don’t see it,
Then spies on us nightly through the keyholes in the sky;
The light that no doubt has plenty to say about us, having seen us at our worst and most vulnerable;
The fault-finding light prone to exhibiting most unbecomingly what our cantankerous expressions have done to our faces;
The light that flatly disrespects our ways:
Waking us up when we do not wish to wake up,
Blinding us when we would rather see,
Making us see, when we would rather not, how paltry we are,
How old we are growing,
While it appears terrifyingly undiminished every morning.
Before our coffee is in our mug, a new hoard of young light has already traveled from afar
To come wrap its strong, bright hands around the bars of our front gates.
This is the light that must be kept out.

That is not all.
Do not think there is not light out there awaiting the death of our civilization,
Anticipating the inheritance of our houses and our heirlooms.
Other light is less passive, less patient.
Do not think there is not a radical element of light,
Gathering sparks in secret for the flash that will mean our doom.
Look at what has come before:
Isn’t it clear that without light there would have been no wars?
Let us not be complacent in the face of such danger!
Let us not let light be the final victor!

The only questions, then:
How high, how thick, how permeable
Shall the barricade be, and of what material?
Nothing is impossible for those who built a democracy and, before that, an arc.
Let us trust the details to the engineers and generals,
Who are, even as we speak, whispering important whispers in their meeting in the dark. 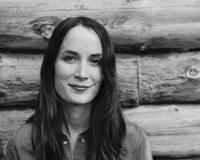 Amber Burke teaches writing at University of New Mexico-Taos, where she also coordinates the Holistic Health and Healing Arts Program. She is a graduate of Yale and the Johns Hopkins Writing Seminars, and her work has been published in the The Sun, The Superstition Review, The Michigan Quarterly Review, The Raleigh Review, Sky Island Journal, Barren, Essays and Fictions, apt and The Pinch, among others. Also a yoga teacher, she regularly contributes to Yoga International. Amber recommends Stray Hearts, the animal shelter in Taos, New Mexico.