You have been called into Department Chair Peterson’s office the next day after a sternly worded email that you received from him, with President Canasta cc’d.

But goddammit, you still have your PhD.  Rumpelstiltskin may have taken your most treasured book, Infinite Jest, and your novel in progress, but he didn’t take your PhD–your greatest achievement, your livelihood, your ticket to the ivory tower–away from you.

And Rumpelstiltskin hasn’t taken your dignity, either.  Even if you embarrassed yourself slightly when a crowd of academic colleagues gave you the look of death in the middle of a humanities conference yesterday.

“Ms. Miller, you caused a member of our campus community–a graduate student–to sustain numerous physical injuries and mental distress, and you triggered him with microaggressions and displayed ableism by calling him by his name.  Rumpelstiltskin has a documented disability–phonophobia, particularly with respect to hearing the sound of his own name.  He has agreed not to sue you if you go quietly and provided that the university takes appropriate action.

“What’s more,” Professor Peterson continues, “Rumpelstiltskin claims that you took credit for his work in all the courses that you were responsible for teaching this term.  He tells us that he has been doing the entirety of your lesson planning and grading for you.”

“That is true,” you say, “but I was under the impression that TAs do that sort of thing.”

“We never assigned you a TA, officially, and thus, Rumpelstiltskin was helping you of his own accord and you were responsible for doing all your teaching work on your own.  What is more, the duplicitousness with which you employed Rumpelstiltskin to do your bidding without payment or recognition of any kind borders on graduate student abuse.  The manner in which you carried out–or, rather, escaped your teaching responsibilities–gives me, President Canasta, and the committee here serious pause.”

So, they pause.  And they wait.

And you think of what to say to defend yourself, even referencing an article in the Chronicle of Higher Ed about those adjuncts in California who were hired to work without a salary, but ultimately, you have no real defense, other than to say that “But he did take things from me as payment.  He took my favorite book and my novel premise and–”

“That’s enough, Ms. Miller,” President Canasta says.  “Given the seriousness of the charges leveled against you, and the fact that you have no real defense against these accusations, the committee is left with no choice but to rescind next academic year’s offer of a full-time, year-long teaching position, and… to strip you of your doctoral degree.”

But then you remember that you did earn your doctorate here, at Opportunity University, some years ago.  And it is within their purview to take it away.

“You could challenge the committee’s decision if you would like,” Professor Peterson says, “but we don’t think that would bode well for you or for your rapport with your colleagues at this university…in the other departments.  Nor would it be good for campus optics or our brand as a university.  So, we think it’s best that you go quietly.”

You have a surprisingly peaceful summer.  For once, untethered to a university, you feel free.  You consider pursuing new possibilities for your career path.  Sure, you have to move back into your parents’ house for a moment, but for the first time in years, there is the possibility of a fresh start, albeit without a PhD to your name.  You even come up with a new novel premise during this time and get to work on a first draft.

But in late August, you get a phone call.

“Jane?  Chair Peterson here from Opportunity University.  I hope you’re well.  It just so happens that we are looking for a few instructors to teach some courses this fall term, which starts in less than a week, as student enrollments at Opportunity University are projected to be higher than past years.  Would you be available to teach two sections of freshman comp this fall term?  As an adjunct, of course.  It would be a one-semester contract without benefits and a cap of two courses maximum, and we can go from there.”

You pause, considering the offer for a moment.  You feel tempted by Professor Peterson’s words, feeling the hypnotic, masochistic lure of adjuncting returning.

But then you remember that you don’t have your doctorate anymore, and it isn’t possible to teach at a university without a PhD.

“But Professor Peterson, I don’t have a PhD, as you may remember, so I don’t think that makes me qualified to…”

You would have said something ruder to Professor Peterson, given that you still hold Professor Peterson and his committee after the ‘Rumpelstiltskin incident’ responsible for stripping you of your doctorate, the one thing that mattered most to you in life.  You want to tell him that you gave up buying a house, getting married, heck—you even gave up your opportunity to have children to get that PhD and instead near-devoted your life to Opportunity University and its students.  But you refrain from saying all these things to your former boss in the interest of decency.

“Oh, that’s no matter, Jane.  You still have your terminal MA, don’t you?  I don’t think we stripped you of that, and being an adjunct is still quite possible in that case.  You know, one need not have a PhD to be an adjunct!  I wonder if you even knew that when you first went for your PhD all those years ago and started adjuncting for all that time….  But I promise that the position will be worth your while because the union just negotiated for a $50 dollar/course raise from last year’s rate.  Of course, that isn’t quite keeping pace with inflation, but….”

It’s now the beginning of the fall term, and you pick up your key to the adjunct office in a slightly newer, but still old building on campus.  The English department has since merged with the history and philosophy departments and renamed the “humanities department.”  A few dozen more faculty members have been laid off.  And you still wonder why you’re still here when so many have left.

Before you open the door to your office, you hear the unmistakable sound of labored breathing and a grunt.  A piece of paper is taped to the door below eye level: 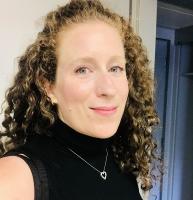 Kirkley Silverman-Mehndiratta has an MA in English and was a Leighton Artists Colony writing fellow at Banff Centre for Arts and Creativity in Banff, Canada. Her work has been published in Litro, Philadelphia Weekly, 34th Parallel, The Write Launch, Turk's Head Review, Extract(s), and elsewhere. She has taught writing at MIT, the University of Pennsylvania, and at several renowned universities in China. Learn more at www.KirkleyElizabeth.com. Kirkley recommends the ACLU and the National Alliance to End Homelessness.