I was lounging by the pool at my plush resort in Costa Rica thinking about my latest ill-fated girlfriend, Renee, who’d changed her ticket to leave me and fly back to New York early, when our groundskeeper rattled my throbbing brain by advising me to beware of dead scorpions at the bottom of our pool.  He was certain they were there although he’d never actually seen one. Yikes! Yesterday, the groundskeeper told me there were UFOs at the bottom of the pool so I already knew his credibility was a bit shaky. But I don’t like to take unnecessary chances and I’ll be damned if I’m going to carelessly step on a drowned scorpion just because my groundskeeper may not get all of his facts straight and has hallucinations about aquatic, extraterrestrial spacecraft.  He might just be right about the scorpion thing.  I’ve read that scorpions come out at night, and that they’re not natural swimmers, so I suppose one of them could lose their way in the dark, fall in the pool and drown. I’ve also heard that some can live for up to two days under water.

Our groundskeeper also says that scorpions have souls. And that when they drown, their souls have already passed beyond the struggles of this world. And why not? I find that credible.  Most people exaggerate their own self-importance and there’s no reason to believe we have a monopoly on souls. But my real question is more basic. I want to know whether a drowned scorpion can still sting. I don’t want to step on one to find out. Not when I’m so vulnerable and easy to be hurt. Renee was my tenth lover to walk out on me in three years.  So please be careful with me because I can be paralyzed by a single, errant word. No scorpion required.

I’m already afraid of scorpions. A friend of mine, Rick, once stepped on one. It hadn’t drowned. It was a traditional type of sting.  Rick stopped breathing for a while, had a bunch of seizures, his foot swelled up like a red balloon, and his pancreas got messed up. That’s not for me. Particularly when I’m all alone again.  Renee’s probably back in New York by now. I’ll tell her any lie I can think of to get her back if I ever see her again. Like there are dead scorpions at the bottom of our pool and that they once had souls. Renee studied arthropods in graduate school so she might find that interesting. She doesn’t believe in UFOs.

I’ve been ditched by more lovers now from more places than I can possibly remember. That song rings true: Aruba, Jamaica---ooh, why did you leave me---Bermuda, Bahama, come on pretty mama, Key Largo, Montego, and now Costa Rica. My girlfriends usually take off when I finally fess up: that I’ve had COVID seven times and my doctors say I have an incurable propensity for catching it. For the rest of my life, that is. A genetic disorder.

Going forward, I think I’m going to keep my mouth shut and not mention it. But could I get sued for that?!  For knowingly placing a lover in harm’s way?  Probably. We live in a litigious world. But all of my money is protected by LLCs, trusts and overseas bank accounts and I’ve got a huge umbrella liability insurance policy to boot.  So I think I’m just going to take my chances going forward.  I’m tired of vacationing and drinking alone.

I’m going to stop talking soon. So it’s time to come clean. It’s really all my ex’s fault. Sally’s the one who ruined me. But I got the last laugh.  How? I never told her about all the money my parents left me when they died. And I never told her about all the money I made trading stocks. Millions. Many millions. Sally’s living a very modest life now, sitting in some studio apartment on the wrong side of town.  She got screwed in the divorce settlement. She just didn’t know. Perhaps she’s even feeling sorry for me. I’d like that. She’s probably thinking I’m just another sorrowful, beggarly man. Sally never was very insightful. 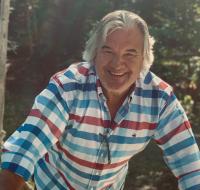 Gil Hoy is a Best of the Net nominated Tucson, Arizona poet and writer who studied fiction and poetry at Boston University through its Evergreen program. Hoy previously received a BA in Philosophy from BU, an MA in Government from Georgetown University, and a JD from the University of Virginia School of Law. He served as a Brookline, Massachusets Selectman for four terms. Hoy’s poetry and fiction have appeared in Tipton Poetry Journal, Chiron Review, Ariel Chart, The Galway Review, Right Hand Pointing, Indian Periodical, Rusty Truck, Mobius: The Journal of Social Change, The New Verse News, The Penmen Review, Misfit Magazine and elsewhere.