Why No One Takes Angelinos Seriously

Angels are not like saints. They are stronger, they are in less agony, and they are homeless.
—Phoebe MacAdams, Ordinary Snake Dance

I see you, a small brown hill curled up under the shade of a tree on La Cienega Blvd. It’s 92 degrees, but with 90% humidity, the heat still sucks water from the bones.

I watch a fit blonde jogger in tune with her own biorhythms, an orthodox Jewish man with his two little girls, and another homeless woman with a Target shopping cart, pass you by. You’re the interruption in my otherwise seamless afternoon of banking, thrift store shopping, and walk back home.

I’ve got a good clip going, but here you are, still as a rock, not moving, and not breathing, as best as I can see through my scratched sunglasses. I don’t want to stop. I move faster, slow down, then speed up, until I’m standing right next to you.

Are you breathing? The breeze is blowing shadows of the leafy branches over you, which creates the illusion of movement. I bend over you, and say, Sir, are you all right?. No response. I say it again, four more times, louder each time. No response. I don’t want to touch you, because it would mean one of two things: you’re dead, which means I’ll be responsible for you, or I might wake you, and you could very well attack me, which is what I’m more afraid of, because it’s happened before. I listen, intently, for any sounds of breath, but the traffic obscures all sounds.

I notice we’re both in front of an abandoned motel, and the irony doesn’t escape me. I pull out my phone, and call 911. The operator asks me, What’s the emergency? I reply, There’s a homeless man laying on the ground. I don’t think he’s breathing. I’ve tried to rouse him, but he’s not responding.

I’m transferred to the local LAFD, and the dispatcher asks me to describe you. He’s older, mid 50s. He’s wearing brown clothes that blend in with the dirt, like a chameleon. He’s got on old leather sneakers. He’s curled up like a child, or a dog underneath the shade of a tree.

The dispatcher asks, Have you touched him? I tell him, No. I got jumped the last time I tried to do that with someone else. He makes a sympathetic noise. See if you can get another person to touch him. We’re sending the paramedics.

I look up, and see two older Latina women coming down the street. I gesture to them, and ask if they’ll help me touch you to confirm you’re alive. They both retreat to Spanish as a defense. I see another woman walk my way, then turn around, and go back the way she came. A guy on a bike whizzes by, too quick to stop. I clutch my phone like it’s a talisman. I keep looking your way. You’ve not moved an inch.

I hear the sounds of fire sirens in the distance. A minute later, the paramedics show up, two fit guys in blue shirts, who jump out of their vehicle, all business. They each don a pair of latex gloves. One approaches me, and confirms I’m the one who called. The second, lays his hands on your shoulders, and gives you a hard shake, like a maraca. He does this again. Still no response.

He shakes you a third time… then a fourth. A low groan passes from your lips, like the creak of an old door being opened after 100 years.

The paramedic shakes you a fifth time. You lift your head and open your eyes, a sparking, unearthly blue. The paramedic helps you to your feet and checks your vitals. The first paramedic shrugs his shoulders, turns to me and says, Yeah, just what we thought it was. He’s drunk. As you move away from the tree, I see what your body was curled around; an empty brown-bagged 40.

The paramedics get back in their vehicle and drive away. You grab your shopping cart, and meander north on La Cienega Blvd. I walk south, and wonder what the hell is wrong with everyone, and why misery is the new normal. I want to weep, but I’m too jaded for tears. 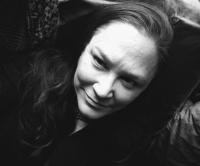 Marie C Lecrivain is the executive editor/publisher of poeticdiversity: the litzine of Los Angeles. Her work has appeared in Nonbinary Review, Spillway, Orbis, A New Ulster, and others. She's the author of several volumes of poetry and fiction, including the upcoming Fourth Planet From the Sun (Rum Razor Press, 2018).