The music is kneaded like dough and pulled like taffy
until we each have our own space in the jam. Drops
of acid give anyone a touch of the Weir.

Army to dig up graves at Arlington. Boyhood cereal dinnertimes.
Baby’s first credit card. Since the earthquake in Haiti
even more child slaves. Clothing-makers in Asia have a riot.

Arrested for espionage and then ridiculed by journalists
on television. Rhythm and harmony. Let us

attempt to see the vastness of correlative perceptions. The visions
of man. The movement of eyes upon the world
is rhythmic and has an honor of constraint. Expression does not
avoid an art of imitation. Light plays the organizing role
of the visual relations of objects. The synchronous movement of light

is a Delaunay reality. Farmworkers washing feet. What’s outlawed
on page one is excepted on page two. The drone
of predator audio and predator video. Oligarchic consanguinity.

She walked from Miami to Washington to tell people
she is here, an undocumented seven year old from Ecuador
now with a bachelor’s degree. Twenty-six thousand
for each country. How long before Iceland
depopulates to the United States? At twenty-six thousand visas
per year per country, documented Mexican immigrants
have a ten to twenty year wait. So they walk.

No one is misremembering the palette of the 1970s.
Opening photo albums we see the world
really was, that I came of age in Orange
County, California. Even close-ups looked farther away.

Reduce your debt. Call now. Die again like it matters.

Attractive this season is a woman who looks like a man who looks like a woman.
Tied together by a manmade web of water. Anya provides much needed sarcasm.
I would love her if she loved me.
The girl whose fuse is always lit. She’s so hot I’m that trail of ashes leading away.

Think about infinity
How hard is
It to do

The floor is deep relief
Tombs where I lost my knees

Each face
A hook to
Hang by.

Rescued, she
Holds over her mouth
A towel

The poet cannot be
Pinned
To a musician’s
Economy

(Take up your stumps and paint)

Tommy is the girl
Who can put me right.

Smuggle out a riff
That poses a question by implication.

(Asleep, she was talking to me in her sleep
I thought so rolled over and touched
Her breasts. She wasn’t asleep
Touching herself she came in my dream. I woke
Before breakfast and the plane landing.)

Who else this Mind
Has been.

Picking apples from trees in front yards. Tart in government oats, butter
And brown sugar. Reagan Cheese, day-glo and under the broiler
Would not melt. Guitars and Happy Hours. Tip jar for beer.
Arcata Food Bank rice and beans and broken
Tortillas. The wood stove
Summered where it never heated our musical bedrooms.

The hypocritical years. The philosophical years.
The farmhouse flanked by 16th & H Streets

Of string instruments whose phrases were transitions between terminals
I now pronounce.

Midday in chapels of the Miracle.
Rain, milk, juice.
Out for the night. Though the Kingdom’s
DJ wasn’t dumb, I left &

Came back for the suicide ballad
Opening song.

On the Amstel a Dresden action figure’s
Head hurts from forgetting
Life on earth arrives geologically.

The soft and warm join popular fronts to spread their pain
Evenly as buttered bread. I belong
Listening to covert music make its kinky assaults on time.

Inside the pyramid the dead pharaoh is not alone.
Tea boys visit from Fatih in the Valley of the Wolves

Harvest the organs of the Conspiracy:
Crusades – Poles that held closed the Gates of Vienna – And the Vedas
Really happened, too.

Doctors have amputated some of her fingers

Nour Miyati had several fingers amputated
Doctors say they may have to amputate her toes
A newspaper showed the maid black and blue, with bandaged hands

But it’s those Entwhistle songs that smell of the dark

Just
One world
What if

I have showered and after this song
Would go out to get milk for coffee
But did not keep that step ahead.
Even

Richard Nixon had to sign the Endangered Species Act.

As long as it is before I fall asleep
That is not sunlight though could be
Father and son hooligans
Servicing the State.

Home from the holiday after tomorrow, I insert
A sentimental muse of bitter water.

Deified police ban on public protests. Anti-whaling standoff in the Antarctic.
Hostages in guerrilla hands. The BBC asks what football means to me.

Look through papers. Change the subject. Get used to answering
Questions. A protestor wants what was had before the border squeeze.
The vodka trade in sausages and cigarettes. Madagascar’s
Flowering palm’s suicide cycle: Hindu-Buddhist
Relations.

America is the end. It means you’re never coming back.

The sun rises mid-morning now in The Netherlands.
Ships run aground in China’s iconic river when a Maori poet dies in English.
After a disputed election the bodies politic lie in morgues.

No one shoots the guns we see people shot
By but people are.

Who is shooting is the comment of the camera
To the baby from the mill.

Shino, marry Rikichi. After Yukiko, only he could love you.
​Katsushiro is just a bandit. There was more honor
In Kikuchiya’s samurai ass.

Textual sources for italics section in “In From Peripherals”: 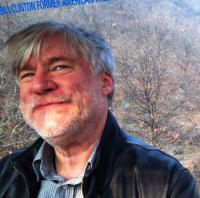 Nicholas Karavatos is a poet who often performs in spontaneous collaboration with musicians. A graduate of Humboldt State University in Arcata and New College of California in San Francisco, he currently teaches literature and writing at American University of Sharjah near Dubai in the United Arab Emirates.