We Who Are Not Dead Yet

I was in the shower reading Hegel
The water was scorching and the pages
became too hot to turn but, hey,  that’s OK
Hegel’s not much of a page turner anyway.
Then I realized in a flash merely having a
shower to Be in was already privileged
despite anything Hegel had to say and
the abjection of all those bodies cla
m
ouring for running
water was literally built
into the structure of my hot
shower. Master Slave was in
herited through the pores of our
skin. I turned up the temperature
until that very un-melaninated
skin I was roasting in could
accurately be described
as post-Hegelian.

They caught one of the students using a batch of my poems
as a human shield. This student was so deluded by her
colonial education she actually thought that poetry
had the power to prevent rubber bullets from
penetrating her skin, that non-rhyming
poetry was a kind of muti that would
make her impregnable. The cops,
none of whom had ever finished
high school, whispered to her
while they were bending
over and cocking their
guns, they whispered
softly, “Don’t go
changing, to
try and please me...”
the lyrics to an old Billy Joel
song but sung in the style of Barry
White and then they proved to the student
that poetry versus rubber bullets
is a poor way to measure
the state of the
nation

Once there was a time, you can still dimly remember it,
when you and your comrades used to laugh at all the
shitheads around you, blind and unseeing as they
were because of having their heads stuffed firmly
up the assholes of their leaders. Then, slowly,
gradually, in increments of infinitesimal mini
scularity, your own vision started to cloud
over until, how long ago was it? Recently,
fairly recently, or perhaps a lot longer,
time is very hard to tell when you’re
in a colon; you noticed that all
you could notice now were
the occasional movem
ents of your leader’s
bowels, as the
brown faecal
matter of his
leavings flowed
over your nose in
between the tiny little
breaths you dared to take.
It was interesting now because
the ostensible difference between
you and your leader was not only that
you were a shithead and he wasn’t; but,
more significantly, he told his own lies where
as you repeated his lies verbatim. Perhaps some
distant memory of who you used to be inspired you
to make the herculanean effort of getting both shoulders
into your leader’s rectum and yes, you did it, you actually moved
your entire body into the anal canal and crawled, wormlike to a
distant place where you could hear the hubbub and when you
got there, boy were you surprised; a million other shitheads
like yourself all in the process of turning to worms. You
were not alone at least, and now, in the comfort of
your leader’s bowels you could all enjoy his con
stant feasting with only the occasional distur
bance of some fallen from grace shithead
being blown noisily out of your leader’s
mighty asshole along with other dis
gusting faecal matter. Does it
never occur to you that it’s
only a matter of time be
fore it’s your turn to
be farted out?

They turned the torture zone into a tourist site
the torturers all got jobs showing busloads
of foreign schoolkids where the tor
tures used to take place.
My waitress served
me a cheeseburger
with no sauce
She told me
that her
father
had
had his
fingernails
forcibly removed
in this very room

back in the day - that’s
how she got the job, it was
her inheritance, she was a bene
ficiary of the new state’s benevolence
And this party political broadcast was paid
for in denominations of twenty and fifty Fingernail notes
by the party concerned

We live in a country
where a white man's property
is worth more than a black man's life
We are collectively responsible for this atrocity
We have, collectively, the power to tear
the walls of this Prison down

We who are not dead yet. 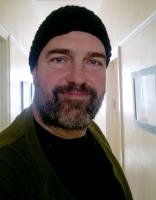 Aryan Kaganof is a project of African Noise Foundation.

The Tiger by Andrew Fowler
"The Scent of Green" and "Dying from a different kind of arid" by Sharon Lopez Mooney
"Sheets of burnt composition paper," "Newsprint fingers," and "Pancake mustache frozen in place" by Joshua Martin
Mucus by Paul Kavanagh
Camera Obscura by John A. Griffin
"Homage," "Testament," and "As A Citizen" by Peter Maeck
"Beatitude: from Syria," "Anxiety at the Borders," and "We have been." by Leslie Prosterman
Dayenu by DeWitt Henry
Six Paintings, September 2021 by Giorgia Pavlidou
"helios, you adorable psychopath," "here the palm trees wave at you saying everything is possible," and "the split second the heart of the solar system skips a beat for no reason" by Giorgia Pavlidou
"Anorexia Nervosa" and "Youth, Yoga, and Reincarnation/ for Diane" by pd Lyons
"My Problem with Statistics," "Name the Responsible Party," "'Adorable,' They Said," and "Back when destination was fluid" by Carol Dorf
"Bodega Privilege" and "Hidden Figures of Harlem" by Celestine Woo
"20/20 vision" and "Death in the City" by Roy Duffield
"States' Rights," "Going to the Mardi Gras Parade, 1984," and "Looters" by Gary Bloom
The Notaclysm by Ryan Undeen
Manufactured Goods by L. Shapley Bassen
monroe and she by matt monroe and lea leone
"cobalt blue," "small gift, early autumn" and "through rain, through walls of poisoned sunlight" by John Sweet
"You act like this is a game—" and "Sunflower Seeds of Indignation" by E. Martin Pedersen
"Earth Speaks," "Birthday Bucket-list," and “Recalibration" by Karen Neuberg
The City is Alive! by Jonathan Hayes
"We," "Visitor Bearing Message," and "As for the Worm" by Tobey Hiller
Fable with Wings by Tobey Hiller
"Incongruous Reflections (August 2020)" and "Extinction Romantic (November 2020)" by Rats Trujillo
"Zurich" and "Whakatane" by Mark Young
Three INFORMATIONs by Bob Heman
"Shtick" and "The Joyful Sea" by Frederick Pollack
Beginning by Rosalind Palermo Stevenson
Escape 2 by Stephen Page
Nine Paintings, August 2021 by Mario Loprete
"Suddenly 21 Times," "Before Grassroots Closed," and "After in a Florida Motel" by C.O. Moed
"Woke" and "Thrown and Gone" by Heath Brougher
The Reptilican Convention by Rubino del Sur
The Zenith of the Neo-Anti-Environmentalists by Stewart Michael Berg
On reading Kristin Sanders's "Cuntry" by Darryl / Dadou / Baron Wawa
Modern Olympian Odes #27 & #28 by Michael Ceraolo
"I play the fox," "The Three Fs," and "Homicidal Pigeon Fever" by James Cole
My Ghost by Diane Gurman
"Needs," "Fashion," and "It Helps" by Jay Passer