We Lived the Kind of Life That Goes Unnoticed

We lived the kind of life that goes unnoticed, in a town no one cared about. Small town, run down. No highways near it. Nobody noticed guys like us, guys with crummy lives. Not until we shot someone or got shot. Not until our face could be used as the face of some new drug epidemic.

We were still in the litheness of youth, but you could tell which ones of us would be fat. It was Halloween. Alan’s mom had a barn. She would let us drink there as long as we laughed at her jokes and told her she was cool.

We liked the barn. The hay made our eyes itch. Sometimes we splashed beer in our eyes to calm them. We drank Bud and Rainier. We dreamed of buying ranches in Montana where a man can be a man and own so much land he feels like a king even if he’s crummy. We talked of girls touching us.

There had been a Halloween party at Kaylee’s house. But it ended early. It was the kind of party that’s all kid party except there were no paper hats.

Alan drove us back to the barn. He drove because it was his house and he was the least drunk. The green vest he wore to work at Menard’s was crammed under the seat, flecked with Rainier. Alan was scared of getting caught by the cops, so he drove fast to skim off a few seconds of drive time. He drove so fast the rest of us were whipped around – ribs smashed against elbows, heads bouncing off the metal rim of the truck bed.

When the truck stopped there was blood from somewhere, but we checked each other as carefully as when we check for ticks – running our hands feather light across the skin. No one found a wound.

We puked in the cornfield. It was cut down to the fallow this time of year – scrubby and torn up like a rough buzz cut. We threw our own Halloween party. We punched the scarecrow dressed up in Alan’s old school clothes. The cloth was stiffened by rain. We filled a silver bucket with hose water and tossed half a cord of apples in it. Bobbing for apples made us laugh like apes.

There’s no party without music. One of us hauled speakers into the hayloft. We clambered up and cleared the hay away to the sides of the loft. We reached inside the hay to push it. It was itchy in some places and damp in others.

One of us was rooting around in the hay and grasped sagging flesh over small bones. We looked. There were baby mice. They were born blind and might have been born dead, surely dead, now, shoved still in the nest. The momma mouse gone. “Do animals mourn?” we asked each other. No one knew. We scooped the baby mice into a plastic bag and chucked it into the cornfield for the turkey hawks.

It sobered us. We felt the numbing coming off. We stole the tequila from Alan’s mom’s closet. She loved Margaritas and the syrupy gallons of Margarita mix from Wal-Mart. We loved her, in a way.

We ran through the forty-five minute party playlist two times. Then a Ford Escort rolled up. At first we were frightened because all cop cars are Ford cars. But then Kaylee climbed out. She was long-legged, tan from running outdoors, often kind.

“Give it back,” she growled.

We were stunned. We shuffled our feet. We knew what she was talking about – nylon stockings. The sheer kind, the kind you don’t think a girl would miss since they are two for a dollar at the dollar store.

“You stole my stockings. You pervs! It’s sick and I would call the cops if I didn’t hate cops more than pervs.”

“Why are you always such assholes?” she yelled. We didn’t know.

Alan offered her an extra sweet margarita. She acquiesced and drank with us. We asked her if any of the girls had crushes on us and if tampons hurt when you put them in. Could they pop a cherry like a man? She laughed and at us and kept laughing until at dawn we pointed to the plastic bag and told her what was in it.

She peeled back the bag and gagged. She gazed at the baby mice with such rawness that we felt for the first time together what we had all felt alone. It was a large and empty feeling, like the tenderest sheen of black ice on a curving road. It was the ache of being noticed once and only once. Only noticed in pity and disgust, only noticed once. 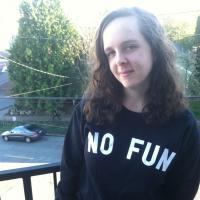 Meagan Masterman lives in Massachusetts and grew up in Maine. Her work has previously appeared in Unbroken Journal, Reality Hands, Specter Magazine, and others. She haunts Twitter under the handle @MeaganWords.