'We depart toward light, but June,' 'This work isn’t just between you & me anymore...,' and 'I write your name'

We depart toward light, but June
Isn’t through with us. Do we know
How the carpetbaggers drowned, or their
Stance on fake historiography? The meanings of
Events often confound us, yet
Seasons change, as evidenced by
Clothing. Don’t be eager
For chatter, under the cluttered
Or often shuttered
Urban marquees. The next
Voice you hear will be indigenous &
Polyvocal. The locals would fear it, in
The bliss of going forward
If the moon weren’t hidden
In a bright copy of wildflowers
That are already new & trembling at
The edge of your awareness. Something there is
Releases me
From the rigors of distraction—
Watching café table umbrellas flutter
Like sepals in raw light. The key
Is not here, but soon will be. It follows
Idiomatically, then, that songs will fade—
Yet we go on singing them anyway
With a determinism that makes
Young roses smirk— & the tenderness
Of whatever else we’d forgotten to
Say.

This work isn’t just between you & me anymore, is it? Now afternoon skies darken, as full of breath as cities were. When we go on, the sun is fickle. People move among the rooms trying various artifacts on. We are called to be among them, moving, moving past all care, as if lifted up then set suddenly aside. Rimbaud doesn’t care: he has his guns & equatorial indifference; he has rebellion & graduate seminars; the schoolchildren of France now loathe his name. Rimbaud was not a Scorpion, though he came awfully close. Closer than you or I.

Now nobody thinks anymore about Charlieville or fake novels or Rimbaud’s time in Africa or even Melville’s time at sea. Borders are kept between countries as well as ourselves. There are even borders sometimes within selves or countries, dividing the life now from the past life. Even when that woman wears a glittery, ostentatious July Fourth cap— as if children were not caged in the desert (rather than in R’s <<déserts de l’amour>>), as if humans were not culpable, as if there were any <<amour>> still left here.

We are all culpable, even when we say we are well meaning. Or well hidden, well positioned, or none of the above. Unwell. I, too, sometimes want to hide, as if inhabiting a false narrative, a myth of histories & petty beliefs that makes everything seem good or true or meaningfully erratic (in a benign sort of way). & This, too, is a form of hiding, in which the narrator gets to frame the events & result from them rather than be an actor within them. One who acts upon the others as well as one acted upon. In this sanitized version of history, meaning equals good, while not intending hurt does not equal bad. Whereas, in truth, in the narrative of the hidden, not intending merely does not equal. It is a form of silence.

If you listen for your voice, will you still find meaning there? If you hear yourself, will ghosts howl back at you?

A world is there
That no one sings

In money streams that you abide
Until the sky turns off

Who harmed you
With the notion
That humanity isn’t contagious?

What search words
Do you most resemble

& Where do we go
Until all prayers
Harden into silence?

Will stars forgive
What you won’t give

What you don’t already mean? 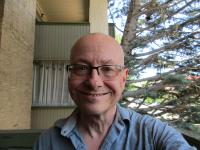 Mark DuCharme is the author of We, the Monstrous: Script for an Unrealizable Film, Counter Fluencies 1-20, The Unfinished: Books I-VI, Answer and other works. His poems have appeared widely in journals and anthologies. He lives in Boulder, Colorado. Mark recommends the Southern Poverty Law Center.