Feathers of smoke climb from between my legs.
Do I want to see the world destroyed?
I don't know. We try to move forward
While fistfuls of salt fall across our pale future.

I can't differentiate these motives from each other:
To pass out water under hazardous sun or to
Gather ash to my ego, senselessly held tight forms.
I shut the door on my fingers to protest. Its too late now.
The fragile boundary between sterile light and sputtering.

I've killed my children before they breathe,
Before the seas will swallow us. This corner of civilization is
Demolished before it curdles. If we were stitched to a different pattern
Would I so easily strand myself in conflict? To always sleep discomforted?
I am alive because I am alive. I would not return to Earth,
Not this crumbling world.

I'll never be free of this generation. I'll never retire from
Taking knives to the citadel. I'll weep at the stars until my bones are meal.
I'm too focused. Too sincere to tell a child of this. I'm too afraid.
I'll be nobody's grandparent because I'm due to be murdered someday.
If I met myself younger I might throttle them, to unravel this
Noxious perspective early. One less or more among the ruinous years.
I don't want to think about it.

We'll be under the shallow seas before we see this right.
The sky becomes stale while I remember desperately
Unconscious time: the flash while a bone is shattered,
Mistaken self in love to incorporeal hours, anything to forget.
The instants my brain is lean and potential, like heated oil,
Before the smoke or the spattering dishevels me. Little times in tune with life.
Dreamless sleep before deterioration, before
Longevity in polluted conscience. Do I want to see the world destroyed
Before it spirals through fever? Before we chew ourselves to shreds?
Do I want to see it myself?

And immaterial death fills the air. It clutters my lungs so this isn't real anymore.
I could drive my car into the ocean. Momentum feeds together a future of violence.
I'll exist until removed. My bones are hollow and poisoned. I will fight until I'm killed
And never beget another life to this. September after September crushed beneath
Smoke like locusts and those red and yellow skies. I was born in September.
I don't expect it will be different seven or twenty years from now.

The spiders and lichen will be my orphaned daughters
Within the wetted kindling of our cities. I'll teach them nothing of pain they were not born through.
The warm, impassive oceans are my sons. They will succeed us
Under future dawns and the moon will turn. Our mythic towers felled on each other.
A bundle of sticks intended for nothing. Interned beneath time and our
Listless composition. This counterpoint will collapse upon
A hoarse soloist someday. Damned by their ancestors
To carry an acidic refrain. Permanently now
I refuse to have any part in that atrocity.

I saw into the future
During a panic attack
Trying to pull the guts back into my body.

The faucet knob is stripped
So the bathroom continues to flood
While I wrestle and stammer.
The water is turning darker as waste.

I drink some wine to watch the flies
Microcosm battlefield crows
Staring omen, or they spin
Like radio static through the room.

I already died once.
I'm trying to forget.

Staccato sunrise
Like water dripping in a bucket.
I vomited collapse tomorrow
And the ants crawl out of my fingers.

It happens slowly until
Reflections on the water won't recognize us.
I don't remember if I am myself
Or the godawful sound of police.

This already happened. A previous life
I woke today to drink some coffee
And fell beheaded before noon.

The rotten meat of feeling.
Forgetting and startled again. Dirty water.
Dreams like intestinal worms.
Decades of silence between
These shuttered sequence breathing.

I already know how I'm going to die
So its not worth much considering now.
I'm getting worse
So I continue. I pace
To the end of the week and back.
My life is pregnant with incredible violence.
My body is covered with scum
From wading through terror.
There are so many exits
Unavailable to me.
There are so many years to live. 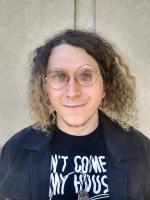 Rats Trujillo is a grocery store worker, queer social dissident, and esoteric multimedia artist. They are active around Seattle and their writings appear sporadically in print and digital. Between writing and other work they arrange and perform leftfield electronic music as 'Uncanny Dandelions'. Rats recommends mutual aid over charity, but a group in need of funds is From The Heart PNW. They accept support through their venmo account @fromtheheartpnw.