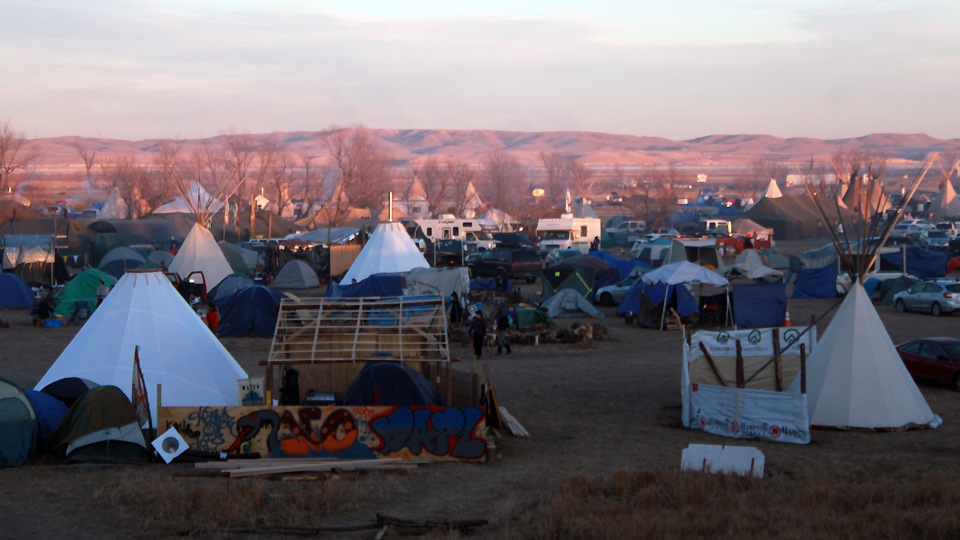 Cannon Ball, N.D. — The Oceti Sakowin (Standing Rock Sioux) water protectors’ camp continues to hold as the snowy weather rolls in today for the first time since its April 2016 launch. Indigenous activists from all parts of the world have geared up for winterization at the controversial Dakota Access Pipeline construction site. While the camp has technically been in operation since April 1st, many more people arrived during the summer when social media began to help spread information about the pipeline that was not being reported by mainstream media outlets. Eyewitnesses using Facebook, Twitter, Instagram, and other social media platforms have played a critical role in providing an accurate representation of the real, and sometimes unsettling, events unfolding at Standing Rock.

But activists in the camp say the messages being sent back and forth through social networks haven proven to be a double edged sword for the movement, as false information also easily spreads throughout the world wide web. Just this week a so-called ‘secret’ video message was sent to a number of people of a Native woman claiming that the water protectors were being sprayed with chemical weapons from a crop duster plane. The individual identified herself as Candida Rodriguez Kingbird, part of the Red Lake Anishnaabe Chippewa Tribe. Since then the Indigenous Environmental Network released a statement online saying that this was based on “unverified rumors” and that the Oceti Sakowin & Sacred Stone camps leaders have been looking into these rumors. But there is no verifiable proof, at this time.

In addition, tensions have been high since the U.S. Army Corps of Engineers released a letter on November 25th, 2016 stating that it will close all lands north of the Cannonball River, which is where the Oceti Sakowin camp is located. The letter further stated that anyone on the property after Dec. 5 will be considered trespassing and may be subject to arrest. Many immediately feared the worst, as a number of the water protectors have had previous run-ins with the heavily militarized police force that is guarding the pipeline.

Dallas Goldtooth, a leading organizer of the Indigenous Environmental Network, and member of the Standing Rock community, took to Facebook this morning to clarify the specification of the letter, “there is no forced eviction that is going to happen.” He opened the video with a screenshot of the camp covered in a blanket of snow. “Everything is beautiful at this very moment,” he stated. Goldtooth went on to discuss the details of the letter sent by the Army Corps: “It merely stated that that they do not want to be held accountable for legally anyone that gets hurt at this camp-they are all just trying to cover their butts for legal liability.”

The U.S. Army Corps of Engineers issued a follow-up statement November 27. In it, the Corps stated that they had “no plans for forcible removal” but insisted that those who choose to stay would do so “at their own risk” citing the fact that emergency services such as, “fire, medical” would not be available in those areas. The follow-up statement further states: “Those who remain will be considered unauthorized and may be subject to citation under federal, state, or local laws.”

In the meantime, the community in the camp can refocus its efforts on the winter ahead. With the site now home to several different camping grounds, and thousands of water protectors, the need for resources has increased. Demand for warm clothing and firewood is at the top of the list, as well as a demand for people who can provide labor during this critical time. Voices from the community have requested that people avoid ‘tourism’ visits of the site, and that visitors be prepared to volunteer time and resources to assist those most in need. Regardless of what may lie ahead with regard to the confrontation with law enforcement and with Energy Transfer Partners (the company behind the Dakota Access pipeline project), the water protectors intend to stand their ground and continue to fight “the black snake” with the power of prayer, perseverance – and organizing.

This article was originally published at People's World under a Creative Commons Attribution-NonCommercial-NoDerivs 3.0 license. 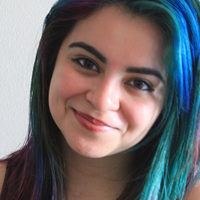 Michelle Zacarias is a writer and campus coordinator at People's World. A graduate of the University of Illinois in Urbana-Champaign, Michelle has invested her time in raising awareness on issues of social justice and equality. She has written and conducted research in several parts of the world; most recently Ho Chi Minh City, Vietnam, where she presented on disability awareness at the U.S. Consulate. Michelle self identifies as multi-marginalized: as a Latina, a woman of color and a person with disabilities. She considers her experiences a privilege, one that she hopes to use as a platform for spreading socio-political consciousness

Stare the Cloud by Krisztina Rita Molnár, translated by Gabor G. Gyukics
Warrant by Chris Butters
"To Heal the World" and "Your Birth Is Your Fate" by Ethan Goffman
"fata morgana" book release party with Joel Chace, Eileen R. Tabios, Norman Fischer, and Orchid Tierney
"Conspiracy," "Flood," and "Our Aging" by Ken Poyner
Regis Treadwell, Inc. by Jon Wesick
"The Mad Muse" and "The Black and Whites" by Luis Cuauhtémoc Berriozábal
Failure by Borbála Kulin, translated by Gabor G. Gyukics
"A Long-Time-No-See Relative" and "As the Offspring of the Cichlids" by Zita Izsó, translated by Gabor G. Gyukics
The Broken Dumbwaiter by Mark Blickley
Homeless/Hopeless/Helpless by Adrien Kade Sdao
"The Fate of the Victim" and "Security Guy" by Andrej Bilovsky
"rose milk," "somewhat's later," and "in the garden where you told me that you loved bacon and I oinked" by J. D. Nelson
"A psalm for Mr Miura," "Silver Cockroaches and D-76," and "And the sound of AC" by Darryl / Dadou / Baron Wawa
A Sweet Regular Drone by Madeline McEwen
The Patient by Eric Sentell
Paintings, May 2021 by Ron Bennett
"Don't Test Me, Pro," and "Toyi-toyis R Us" by Charles J. March III
Snoop Dogg & Dr. Dre Recommend Sipping Gin & Tonic Juice During These Trying Times by Charles J. March III
"Long Cords" and "A Reminder" by J. B. Hogan
The More Things Change by Deborah Ann Percy
Three Dispatches from Elsewhen by Andrew Darlington
"Bird Watching," "Old Cartographer," and "The Whole Place Is Moondipped" by Karina van Berkum
"fault lines," "curbside lullaby," and "the bar noir" by DB Cox
Where No Secrets Can Hide by DB Cox
"Typescenes" Book Release Party with Rodney A. Brown, Shannon Stewart, and Rocky Block
On reading DC Wojciech’s The Longest Breath by Darryl / Dadou / Baron Wawa
Readings in Alabama and Louisiana by dan raphael
Readings in Alabama and Louisiana by Wendy Taylor Carlisle
Readings in Alabama and Louisiana by Jeff Weddle
"The people, no," "Service department," and "Our beating gourd" by Jeremy Nathan Marks
"Solum, Patron Saint of Wallflowers," "Medius, Patron Saint of Uncertainty," and "Cito, Patron Saint of the Too Soon Dead" by Paulie Lipman
Terpsichore, Not by Michael Praetorius by Karla Huebner
"I cannot help your violence with like buttons" and "In My Country" by pd Lyons
Alchemy of Night by Moira Crone and Leona Strassberg Steiner
"A Line from Tina Arena," "A Line from Hilda Doolittle," and "A Line from Mark Young" by Mark Young
Sun-Ra Sutras 1, 4, and 5 by Kevin M. Hibshman
"follow the numbers" and "resistance is not futile" by j.lewis
"Corona Tornado Caballeros," "Kill! Kill! QAnon!," and "The Grand Wizard" by Kurt Newton
"What Will Not Let Itself Be Washed Away" and "Four Variations and a Theme" by Richard Jeffrey Newman