I woke up, from a nap, on a bus I did not remember boarding. It was daylight. My neck was stiff. I looked out the window. The surroundings were unfamiliar. The foliage was unfamiliar, trees and plants I had never seen before. The signs on the shops were in a foreign language. One shop had a painting of a man in an apron chasing a pig with a meat cleaver. The man had a crazed look in his eyes. The pig was wearing sunglasses. The sign said “Klenstarfig.” The bus driver called to me. In a thick accent he said, “Sir, you tell me alert you as we approach your stop. Your stop is next one.” I sat up straight and looked around, at the empty seat next to me and the rack above. I didn’t seem to have any luggage or personal effects, only what I was wearing. “Is your stop,” the driver said. I thanked him and got off.

Across the road from the bus stop was a large red brick building with a sign that read “Klenstarfig Pustali Zintro.” This must be where I was headed. I walked across the street to the building. I was stopped by a guard. “Nimo?” he asked. I guessed that meant name, so I told him mine. He checked his clipboard and when he found my name he waved me in. I entered the building. A man in an apron said, “Nimo?”

“Peter Cherches,” I said. He handed me a pair of overalls.

I looked around. There were no pigs in sight.

“Where are the pigs?” I asked the man.

He started laughing, a bellowing belly laugh. “War peeg! War peeg, he say!” He pointed toward a door and said, “You!”

I walked through the door. There was a cubicle with my name on it. I saw a computer on the desk. I changed into my overalls and logged in. A message popped up on the screen: Valku, Peter Cherches.

I breathed a sigh of relief. I was back on familiar ground. 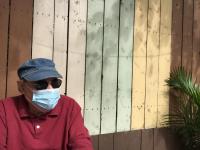 Peter Cherches’ most recent book is Masks: Stories from a Pandemic. Called “one of the innovators of the short short story” by Publishers Weekly, he’s also a jazz singer and lyricist. He’s a native of Brooklyn, New York. Peter recommends the Jazz Foundation of America.