Caitlin would come home and drop her keys on the dining room table at night, and light a cigarette, turning on a box fan to blow the smoke outside, far from where anyone could smell it. She would light her cigarette and she would put on her vinyl copy of The Songs of Leonard Cohen. Sometimes Amy, her best friend from college, would come over, and they would open a bottle of cheap Shiraz.

She would put on track 3, “Winter Lady,” and would think about the first time she heard it, when she was surfing the channels on a sick day home from school, McCabe and Mrs. Miller on TV.

It was not long after that she smoked her first cigarette, as a high school freshman, in the arboretum across the street from the school, with Ben, the boy she was kind of seeing, kind of not. Her parents told her she had a bright future ahead of her. She wasn't sure about that, but was somehow sure Ben didn't. She hummed the song under her breath as they walked through the snowy arboretum, “traveling lady, stay awhile...” – and wonder whether she was the traveling lady, or whether she was Leonard Cohen.

Each leafless tree was marked with a placard, she remembered, each showing a botanical name. Fraxinus americana, the American ash. Cercis canadiensis, the Eastern redbud. And she remembered the first columbines of spring pushing their way through last autumn's leaves a few months later, when she decided her days of hanging out in the arboretum were done for.

She would listen to Leonard Cohen in her apartment, a place often described by visitors as “cute” or “quaint,” and one night, she would think of the night she saw the tiger on 3rd Street.

It was only the second or third time she'd ever smoked weed, and she was pretty sure she was doing it right now, and Ben's older brother had left them half a handle of Barton's vodka, an act that seemed remarkably generous at the time. She'd gotten a little high, had a few vodka-and-Sprites, the Sprite poured out of a 72-ounce fountain cup from the Casey's General Store. It was late, she was tired, but it wasn't a long walk.

The snow began to fall heavy and thick a little before she left. Of course it had to snow like this when the next day wasn't a school day. Just her fucking luck.

The railroad tracks split their town in half. Once upon a time, when there was money, real money, in this town, there'd been a right side and a wrong side. Her grandmother had been fond of saying that we were all on the wrong side of the tracks now. On one side of the street, the tracks cut through her residential neighborhood, on the other side, thick woods, where she was warned to stay out of all throughout her childhood.

As she paused, the tiger emerged from beneath an old sycamore.

She stared at it, breathing heavy in her Abercrombie hoodie, transfixed as it moved silently, not baring its teeth, taking each step with balletic precision, each paw making a delicate print in the freshly fallen snow.

“Bengal,” she thought, even though really, she had no idea what distinguished a Bengal tiger from any other. All she knew was her uncles had said something about the Cincinnati Bengals, and she remembered thinking their tiger-striped end zones were pretty when her family gathered around the floor-model Zenith after Thanksgiving dinner to watch the game.

They had tigers in the snow, right? In Siberia? White tigers, like Siegfried and Roy had – her one uncle, the only one who hadn't sat around watching football, but had instead been carefully whipping fresh cream for the pumpkin pie, had taken her to see them at the Mirage during an otherwise ill-fated family vacation to Vegas.

Caitlin hid behind the boughs of a spruce tree, quaking slightly.

“I love you,” she whispered as it passed each cone of light projected by the sodium-vapor streetlamps, before it disappeared into the distance.

She walked home to her Dad's apartment, where she was staying for the weekend. It was called “Colonial Court,” complete with grooved pilasters around the front doors, false white shutters, sconce lights outside each unit. She knew full well he didn't give a damn about enforcing her curfew, hell, she knew full well he was probably in bed with the checkout girl from the A&P, and they'd have to make attempts at small talk the next morning over Cinnamon Toast Crunch. She still unlocked the deadbolt as silently as she could.

And she would go to bed thinking of the tiger.

Caitlin would wake up the next day, the snow starting to melt under bright sunlight, dripping off the boughs onto 3rd Street, spraying slush onto unfortunate dogwalkers, crows cawing, and she would ignore the checkout girl from the A&P, who insisted on dancing in her bathrobe to Nelly in the morning in the kitchen, and she would scan the Sunday Times-Democrat for something about a missing tiger. Nothing had escaped from the zoo. Nothing had escaped from the traveling circus. Were there even traveling circuses anymore?

It was her tiger, and hers alone.

That afternoon, she would stuff her clothes into her backpack and walk back to Mom's house. Everyone was busy, her Dad had to go out and take a look at a potential worksite in the next county, her Mom's shift wasn't over until 6:00. She put on her favorite red jacket and walked down 3rd Street, sweeping the snow off the spruces, wondering if the pawprints hadn't been covered with slush, doubting, really, whether she could trust her perceptions.

She didn't think about that night for years after, except in the most fleeting moments before sleep. High school was tough enough without being the girl who thought she'd seen the tiger.

Time passed. Ben left her for Melissa Sauer, and he moved schools not long afterwards. Her Dad moved out of state too, and she saw him more and more infrequently, until his eventual fatal heart attack at 55.

She asked for a book of Leonard Cohen poems from him for her 16th birthday, and she would write on a card to the Jenny, first girl she really fell for, the line of his, “I am speechless / because you fallen beside me / because your eyelashes / are the spines of tiny animals.”

She gave Jenny the same book to read, and after they broke up, never saw it again, and she wondered if Jenny still had the copy with the inscription her Dad had written: “To Caiterpillar with all my love.”

But something about the way that cigarette hit, the way the Shiraz tasted, the rainfall outside on the Sitka spruces, and she could see it all again – the weave of her hoodie, the silhouette of a tiger disappearing into the first snows of late November.

“Oh... it's nothing... sorry, I was miles away.” She tilted her head and poured Amy another glass. 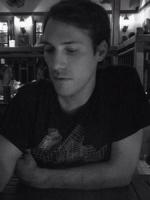 Andrew Fowler is a Middle America-born, Bangkok-based writer and editor. He screams into the void at Subject/Object. Andrew recommends Mutual Aid Disaster Relief.