The Thirteenth Legion of Angels

When my wife was killed, I lost that balance, that rhythm. The kind that lets you feel fulfilled at work and come home and play with the kids and savor a big meal and sleep deeply at night. There’s a tempo to a life lived well, a meter and cadence as certain and subtle as anything you’d find in poetry or music, and without her, everything became discordant and nonsensical.

The manner of her execution was of course part of it. I knew that. Despite the Group and my progress, I still dreamt about it. It went like this: I was in my classroom. We were covering “The Raven.” What’s this poem about? I was asking a group of undergrads. Philip, my sweet-but-dim graduate teaching assistant, was in the front, picking his nose over a copy of the text. Beyond him outside the window, October had arrived, Keats’s season of mists and mellow fruitfulness, its leaves in full flush, and when a good breeze came along they plunged like fat, red-and-gold snow.

The students, fulfilling gen ed requirements, didn’t care about Poe, the poem. Horror? Said one girl. Insanity? Said a boy. The loss of Lenore? Said the smart kid in the room. Not what happens, I said; What is it about?

Poe says it’s about beauty, I said. The four or five who were listening to the discussion seem surprised, actually sat up. Poe writes, “Beauty of whatever kind in its supreme development invariably excites the sensitive soul to tears. Melancholy is thus the most legitimate of all – ”

But I stopped midsentence. I’ve never finished that sentence. Because that’s when the first pop came. Through the ceiling, it didn’t sound like much. A problem with the ventilation, maybe the lights. But then there was another pop, and another. Like fireworks. The room above us. The room where my wife taught freshman composition. The screams, the footsteps, the thuds of heavy things hitting the floor above us like sacks. Seventeen pops in all. I heard all of them. I didn’t know which one. It could be any. I didn’t know which thud. I heard each of the six thuds every time and I didn’t know which one was her.

That was always where the dream woke me. But in real life, it didn’t end there. In real life, the kids who’d managed to escape, some of them grotesquely wounded, sprinted into my classroom and the ones next door seeking shelter. Panting, crying, shaking. We locked the door. I tried to comfort them while trying to pry out of their animal-panicked minds the location of my wife. Desperate texting and calling with no response until the lines were all jammed and service unavailable. It was the police who finally told me what I by then knew, that she was dead.

For a year I went into a dark place. The university offered me a sabbatical, but what was I going to do at home without her? The thought of the kids, as badly as I was bolloxing up their lives through my own grief and self-negligence, was the only thing that kept me going.

The anger phase of Kübler-Ross was the most severe. Some might tell you it never passed, not really. If we’re being honest, I’m not sure how it could.

It was a social media argument that finally did it. He was a gun nut – hunter, sportsman. Didn’t see how dead schoolchildren were his problem, thought they were part of that city-slicking world.

“Boo-Ho” he posted, misspelling things, I assume, in his apoplexy. “Why dont you find a ficking self-help grou?!?!”

The next day, the self-help group found me. I got an email from someone I’d never met. He wanted to talk in person. He suggested a campus burger shop. He signed the email Big Rev.

“I’m your sponsor,” he said to me. He was an enormous black man with a baritone voice like sweet butter. We had met at Daveburger, the best greasy food on campus. Our food was cooling in front of us, a bacon cheeseburger for me. By then, my appetite had returned at times. He had a dry salad. He said he didn’t eat meat.

“What is this then? Some kind of Alcoholics Anonymous group?”

“Of course not,” he said quietly, and his smile reminded me of the high June sun. “You can’t give testimony until you’ve lived a changed life.”

“It’s pretty fucking changed,” I said. A look of regret passed over him. We ate without speaking.

“We know about you. Your wife. It’s how we found you.”

“And you saw the things I wrote online.”

“They’re hard to miss, if you know what you’re looking for. Open letters. Letters to government officials. Letters to the editor. Email rants to friends.”

“I just can’t believe a group like this exists and I’ve never heard of it.”

“We work hard to keep our secrecy,” he said. “Especially since what we do is, for the moment at least, not legal, strictly speaking. Privacy is very important to our members.”

“We have to recruit,” he said, shrugging. He reached for one of my fries, paused with his hand over it, eyebrows raised. I nodded and he took it.

“I don’t need you. You sound like a bunch of psychopaths. No offense.”

“We are a unique support group.”

“Every one. You’ll learn their stories in time.”

The expression slid off his face.

“Who. . .” I started to ask but the words died upon my lips. “What do you call yourselves?” I asked instead.

He smiled a different smile. Awkward, embarrassed, like he forgot his homework.

“The Nameless?” I laughed.

“I know,” he said, raising his giant hands, palms out, fingers spread wide. “We’re still working on that. Sounds too much like Anonymous, if you ask me. We do have some crossover with their organization, especially in the area of intelligence gathering, but we are unaffiliated. We’re working on a better name. And a manifesto.”

“This sounds too dangerous. I believe in change through other means.”

“What means?” he asked, stretching the latter word out to a point of silky incredulity. “Where have all your emails, you letters gotten you? Have they changed laws, friend? Forgetting that, have they changed minds? Has anyone even listened?

“Or have they only shouted all the louder? Have you brought people to your cause, hearts and minds? Or are you a little man all alone on an island, stranded, shouting his rage at a rising and indifferent tide? Your letters are messages in a bottle, floating away, sinking to the black bottom of the sea. Make no mistake: you are cast away.”

“You’re living in anarchy, my friend,” he spoke with a slowness and evenness that stressed a painful logic. “Not just you. Me, you, that cashier. Everyone in this restaurant. A country where citizens gun each other down in the street, in libraries and concerts and theaters – that’s anarchy. Children are slaughtered? Anarchy. It happens and laws don’t change, minds don’t change, nothing changes? Anarchy. And do you know what the secret is to living in anarchy?”

The lesson, the sermon, seemed to be reaching a muted climax. A row of beaded sweat had broken out across his forehead. He stuck his fork hard into his salad, leaned in, eyes wide as plates.

“Anarchy is like paradise: Most of us don’t recognize it when we’re in it. We only think of its drawbacks, of how paradise and perfection are not the same. We think we are unhappy. We don’t understand the opportunity. Not until it’s gone. Then we look back and we say how great it WAS. The secret – the key – to living in anarchy is, like paradise, you must appreciate it when you are in it. Chaos presents opportunity, and you must seize it, and not wish for a single thing that cannot be.”

He sat back again. Dabbed his shaved head with his paper napkin. He shoveled a forkful of salad into his mouth. 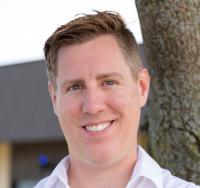 Winner of the Tillie Olsen Short Story Award, Adam Kotlarczyk's short stories have been nominated for multiple Pushcart Prizes. Adam's fiction has appeared in the Tishman Review, Madcap Review, and Fictive Dream, among others. He teaches at a gifted school near Chicago.