The scab-beggar steps to me on the street and asks for some dry wounds. He can see that my arm is full of crusty layers and he's already eying a big wound on my elbow, the one I wanted to buy a pack of smokes with. It's such a long time since I’ve smoked—the overhead charges take away all of my wounds and I can't torture myself forever.

I look the scab-beggar up and down. What a miserable little fellow. Since scabs became the new currency, only weak-kneed, spineless people who haven't got the balls to bruise themselves become poor.

"Grow your own!" I growl at him, covering the wound on my elbow with my bruised hand.

"Please, mister, I'm anemic, my blood...my blood doesn't clot correctly..." he snivels, then adds: "I've got a family to take care of!"

"Then why don't you beat them like every other decent person does?" I yell, suddenly remembering my father who beat the crap out of us every night when I was a kid so he could take us to the zoo on the weekend. He was a great man, but he took too much weight on his shoulders. He and my mother decided they should save some scabs for a new house; they had a big fight every night and beat each other hard for the wound-coins. It wasn't easy for dad because he was also tortured in his workplace all day long. They couldn't save enough for the house because my father dropped dead after a few months. I think that's when I decided that I'd never get married and have children.

"Their blood doesn't clot either, ’cause they haven't eaten for quite a long time!" the beggar cries. "You're not gonna leave me alone, are you?"

I sigh, pinch the crusty layer between my two fingers and tear it up slowly. From behind the brown wound-coin, transparent liquid and some blood oozes out.

I drop the slimy clot-coin into the beggar’s palm. and can almost see him step into a bar to buy some booze with it. But later I see him in front of a milk automat, pushing my wound into its coin slot and a really good feeling overwhelms me. Even though there's really no reason for me to be happy. After all, I didn't buy any smokes.

I go home. The sounds of beating and an infant crying and beating come from the neighbour’s house. Maybe a mother is kicking a newborn so she can buy more diapers for it.

I'm cutting myself with a kitchen knife when an image pops into my mind from my childhood. I was seven, kneeling in the middle of the room, scratching up a dry wound from my knee that I'd gotten falling off my bicycle. I was saving my wound-coins in a porcelain piggy bank while a bald, chubby politician talked on the tv about how great an idea it was to make scabs the new currency after the usual money became worthless in the big economic crisis. "The world will never run out of wounds!"

He winked from the screen.

This was a long time ago. I go to bed. In my dream I see pigs with foaming mouths eat my wounds from a rusty trough. I wake up later with the dark suspicion that the politician in the TV was wrong.

The world can run out of wounds. 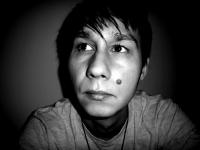