As the clock hit midnight in London, people continued to face the adverse effects of climate change, and over half of his majesty’s subjects remained homeless. Most lived under overhangs that partially protected them from the elements—at least from above. Presently, the ample access to portable loos had cleaned up the gutters and sidewalks that formerly had been littered with vomit and shit. The public desensitized itself to real human suffering through its steady diet of the “undead” in popular films and social media. Besides, the whole idea of British common sense had become pretty much of a running joke since the Brexit vote and aftermath.

To improve upon bathroom habits of those who had little concern about decorum or reputation and ignored all portable loos, the ministry voted to infuse them with 24-hour streaming videos of yesterday’s news. It figured that encouraging natural, daily bowel movements among the masses rather than only the privileged, would go a long way towards cultivating positive attitudes regarding human hygiene. Nonsense. True, people initially lined up at the portable crappers like a movie premiere; everybody looked forward to escapist entertainment.

Unfortunately, the brilliant innovation turned into a bust. Two-minute dumps became forty-five-minute furloughs from manual labor. Residents began to frequent the crappers as couples, enjoying flicks, and doing God knows what else behind locked doors.  In no time at all, a sanitary convenience had been transformed into endless wait.

Some say Tim Linley and others claim Dion Knowles changed all that. Regardless one day, either Tim or Dion defied a refined sense of British manners by pulling down his pants, mooning those nearby, and taking a shit in front portable smart loo. After establishing the precedent, people eagerly followed the free-spirited man in question.

Soon, most began to relieve themselves when the urge hit them rather than wait in a line until their bladders burst—unless, of course, they were savoring shelter from bad weather under The Overhang. Meanwhile, both Tim Linley and Dion Knowles disappeared; on the verge of being yesterday’s heroes, they both emerged rebranded as publicly-minded news casters on the BBC. 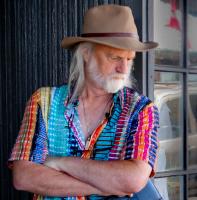