The Opposite of Productivity

This paper was presented as part of the 2022 Conference of the Association of Writers and Writing Programs, as part of the reading "Writing Resilience: A Reading by Neurodiverse Writers," organized by Larissa Shmailo.

When Larissa invited me to be part of this reading, I was all in, completely enthusiastic. When it was accepted, I was devastated. I was convinced that I was unqualified, that my own struggles with mental illness were unworthy of an audience, whereas there were people out there who were legitimately suffering, while I derived social profit off my own pretention. These thoughts paralyzed me, leaving me unable to do anything but contemplate suicide for the better part of a week. Eventually, I realized the irony in being suicidal because you don’t consider yourself sufficiently mentally ill, and while this realization of irony didn’t lessen my symptoms, it did give me a bit of perspective.

I knew there was something wrong when I was very young. Up until recently, I have always cried hysterically when faced with the slightest stressor. My manic periods have always been characterized by rage, rather than euphoria, and my rages have always been intense and largely unpredictable, mostly directed at authority figures. By the time I was twenty, I had a name for these behavioral patterns. Self-diagnosis with bipolar disorder is, and was, ridiculously easy, and delightfully easy to romanticize, and I had access to the DSM-IV, and a wide variety of professional and layperson’s psychotherapeutic texts.

I had these resources, but as a young, romantic radical, I both saw through them and misunderstood them. I recognized that the bulk of psychiatric and psychotherapeutic literature was geared toward making patients more productive cogs in a malevolent machine. I mistook this for a function of therapy, rather than a function of capitalism. I concluded that psychiatry couldn’t help me; that it would actively harm me by making me socially docile. So I made a decision: I would eschew psychiatric drugs, and only take drugs that would enhance my rebellion, and make me a less productive member of society.

That philosophy didn’t work. I was never able to adequately or effectively self-medicate. So I did what a lot of bipolar people do: I went to a psychiatrist, got my obvious diagnosis confirmed, lied to him about how high I was getting, and was prescribed medication, which I took irregularly and illogically. Every time I found myself in unbearable pain, I would call my psychiatrist, who would up my dosage. I frankly don’t know why I did this, since I never took the full amount I was prescribed. Eventually, though, I was prescribed the antipsychotic zyprexa.

On zyprexa, I would sleep for at least twelve hours. That sleep brought me the most involved, cinematic, and dare I say insightful dreams that I have ever had before or since. I quickly found that I could acquire the medication, in plain brown packages, from Canadian post office boxes. At that point, I felt I no longer needed a psychiatrist. I dropped the antidepressants, fired up the bong, and slept and slept—letting zyprexa and its visions take me wherever it wanted to go. Zyprexa was the socially divergent drug I had been looking for.

It was nice. But it didn’t help. My mania was coming under control, but my lows were getting lower, which is what happens when you try to cover them up with drugs, but avoid therapy. One week in El Paso, there was a series of dumpster arsons, and I became increasingly certain I was the perpetrator. There wasn’t any physical evidence of this, but I did have a can of gasoline, and I did dream of self-immolation.

So I checked myself into the psych ward, not for the first time, and not for the last. They kept both zyprexa and weed well away from me, and offered me a new cocktail of antidepressants and antipsychotics, which also did not work. But the experience sobered me in a way other hospitalizations had not. Shortly thereafter, I turned 30, and came to the realization I was not a famous writer, or even a respected editor, and not on my way to becoming one. The situation called for change.

Mine is a story of values. Mine is a story of discovering authentic values in a society that solely values avarice. This is about deciding what to value when your efforts are permanently hobbled, when you are disabled in a society that values productivity for its own sake, morality as a money-making scheme, and introspection not at all. This is about determining a value system in a society so thoroughly capitalist that I can speak of acquiring social profit from the story I’m telling here today.

For most of my thirties, I was not living in major metropolitan areas. Although I have marketable skills, I have difficulty adapting to office environments, and my income is thus well below average. So like so many Americans with mental illness, I found myself out of resources. Whereas I had spent my twenties unwilling to seriously pursue psychiatric assistance, in my thirties I was, due to location and income, unable to.

My partner and I moved to New Orleans in the summer of 2016, when I was forty-one. By that time, I found myself incapable of functioning in normal interactions where Trump supporters were present. You remember: as Trump normalized fascism on a national stage, cops and so-called “lone wolfs” publicly murdered protestors and left-wing dissidents. Myself, I began to have extended, detailed fantasies of vengeance, in which I systematically murdered cops and fascists.

At the same time, my suicidal mutterings and fantasies became more frequent, and more pronounced. I have mentioned that I sometimes spend days thinking of nothing but reasons I should kill myself. For months in 2016 and 2017, I thought of little else.

So I sought to resume psychiatric and psychotheraputic treatment. Treatment options were more available in New Orleans than in my previous domiciles. I now take my meds, every day. I go to therapy every other week, which is an essential part of my treatment.

I am not OK. My mental illness is disabling. One sometimes hears disabled people say they are grateful for their disability, because it has made them a more sensitive and insightful person. I can’t speak for anyone’s experience but my own, but I emphatically state I wish I no longer suffered from bipolar disorder, not because I am ashamed, but because I am in pain. I have no idea what a “me” without this disorder would be like, but I’d be delighted to find out.

But I am the least toxic I’ve ever been. My violent fantasies are sharply diminished. I am more capable of compassion and less given to paranoia. I am more patient with the minor annoyances of daily life and more competent at handling stressors. I am kinder to abrasive people and fascists, and less abrasive myself.

I still don’t want to integrate into society. I work hard to produce the things I want to create, but I do not want to be “productive” in the capitalist sense. I want to be in less pain, and have always sought that. But, thanks to a determined and focused approach to psychiatric and psychotherapeutic self-improvement, I’m causing less pain to others, as well. That’s the best definition of resilience I’ve got. 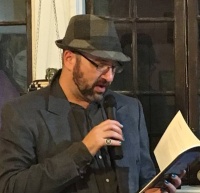