It rained rocks in the old neighborhood where I grew-up (or just grew). The neighborhood known as “Zylonite”—a little patch of earth on the outskirts of a small mountain-town just south the Vermont state line.

The rocks blown out of the hillside by Pfister Lime Company.

Out of a blue summer sky, a shower of white stones would fall like hail into backyards, bouncing in the grass, nipping tree leaves, rattling on slate roofs, and pinging off windows, like bullets…Limestones, tiny as peas, big as golf balls; they dented cars, chipped slate, broke glass, and destroyed gardens…The psychological damage was greatest. Zylonite was a neighborhood under siege; at the mercy of hostile outside forces. A siege mentality developed, embracing fatalism with a religious fervor. That someday someone would have an eye put out seemed probable; that one day someone would be killed seemed possible. The rocky deluge, in any event, made the people nervous, high strung, and often un-strung.

he lime company blasted the green hills into piles of white rubble. A misty vaporous cloud of lime dust hung over the hills after the blasts; the clouds assuming anthropomorphic shapes: Pillsbury Doughboy, Caspar the Friendly Ghost, the Virgin Mary…Settled dust covered everything in a white film. The film lay on dew-wet grass like a coat of paint; turned windows opaque; swam in drinking water like mites; covered highways in sheets: Zylonite became a white neighborhood in a white world, white summer sky hotter than a sky should be, the sun radiated through sulfurous smog hovering over the kiln. Great dirty clouds rising like steam from a teapot over the company buildings along the roadside—spectral Olympian cloud-mountains billowing above a smoky squirming mass, unfurling--grotesque faces peering out the roiling cauldron: beetle-browed Beelzebub—the Man-in-the-Moon—the Bogeyman—Elvis Presley…

All the workers at Pfister’s were white-coated: white frosted hair, white clothes, white boots, white lime dust in their nose, in their ears, in their pockets—they left white trails as they walked, left white imprints on furniture—their cars were white—they had white bowel movements…

The kiln buildings were white tiered cakes dripping vanilla, frosted—bedecked by criss-crossings of angled interconnected pipelines, a network, forest, of pipes arched curved rectangular-ly strung or hung over and about the smoky conglomeration of buildings begrimed in white paste of ossified lime waste. The kiln seared nostrils with a sulfuric smell, mephitic stench, that wafted through the valley on every breeze, the odor mingling with noxious exhaust and diesel fumes of the truck traffic lumbering down Howling Avenue running north to south, from Hooker Chemical plant—black tornado-shaped funneled clouds from stout squat stacks—to the lime kiln (more popularly known as “lime kill”).

Parallel Howling Avenue—which, as one of the few straight-away roads in the area, often became a scene of drag-racing—and likewise running north to south, were railroad tracks behind a line of stunted trees (leaves dusted with lime dust) set at the edge of a marshland of summer cattails and muskrats big as hogs. The marsh, extending from the tracks to the base of the sloping eastern mountainside a quarter mile distant (the Berkshire Hills) was a dumping ground for the lime kill whose trucks—called “Ukes”—raised their beds, PTO’s engaged, allowing a lime-y ashen waste to slide out like mud, like gunk, or glop—like the “Blob,” in the movie by that name—an oozing protoplasmic thing, into the welcoming maw of the swamp. Because of the lime content of the waste, the swamp water looked crystalline and, in places, blue as the summer sky; blue like water in a child’s story book, fairy blue like the Mediterranean in summer, blue like you see in certain tourist brochures, or see-ment Hollywood ponds; blue like some eyes…”Blue Lake” was across the road from the kiln, the ‘lake’ surrounded by a high metal fence, the shores of the lake startling white, like the whitest of teeth or eyeball or beach-dream Barbados, the water dreamiest acrylic blue, tropical fish or bird blue, vibrant, tantalizing, a place to refresh oneself on a hot day or slake a thirst with a blue draught of death…In Winter, the ice of the lime kiln quarry pools, no matter how thick, was clear as a pane of glass.

Adjacent to Hooker Chemical, and across Howling Avenue from my Grandfather’s INN, a paper mill stretched along the highway. The mill, in former times, had produced “zylonite,” a hard plastic material used in men’s shirt collars and in umbrella and hairbrush handles. The mill a grouping of oblong wine-red brick boxes branching from a central four-story edifice. The buildings sunk lower than the highway and almost always in shadow, like a dark red stain in verdant summers…My father worked in the mill after graduating High School and before rushing off to join the Marines, eager to get into the fight (1944) before the war ended.

Gramp’s INN was the most imposing building of the landscape. Four-storied, rectangular, bedecked by lattice work and gabled peaks and cropping of fancy scroll-work, and a massive slate roof, tiles, or squares, so placed as to create a geometric design of fanciful hue. Victorian and ornate, the building, previous to Gramp’s ownership, had been a house of ill-repute (when such places operated legally in America). A popular hot-spot for dancing, parties, even gala balls in its day, but had become, in Gramp’s old age—my puberty years—little more than a neighborhood saloon.

Next to the INN sat a one story house with a screened-in front porch. The house where I spent my first years of life. A place where, according to family lore, I stood, as toddler, face in the screen door, and said, whenever a truck passed by, “phew! Phew!”

Later, I was sent to the neighborhood school, Howling Avenue Grammar, a stately-looking brick rectangle on top of a hill, the lime company at its back. (Was sent there a year too soon, as my grandmother, supposedly, forgot how old I was. Or did she simply want me out of the house and out of her hair (net)?).

Kindly first grade teacher Mrs. Herd blew into a hand-held harmonium and led us twenty students—two classes per room, grades 1-6—in singing “doe, a deer, a female deer,” and along the scale to “me” (what I call myself), and on, to fa, so, la, te, and back to doe, a deer, a…In warmer months of school, whenever a loud blast sounded up in the hills, the big glass school windows trembled, and we trembled too, those of us inside, and outside too, in the neighborhood, Zylonite, land of the free, home of the brave; still standing, under specious skies, in twilight’s gleaming and by the dawn’s early light. 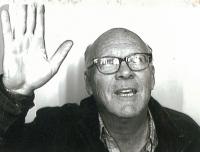 Wayne F Burke's poetry, short stories, and non-fiction, has been widely published online and in print. He is the author of eight published full-length poetry collections and one published collection of short stories. He lives in the Green Mountain State, Vermont (USA).