“They won the war but we had all the good songs,” Elise said, looking up from her computer where she was working on a prose poem. “Who said that? The Irish? They should know.”

“Spanish Civil War,” he said. He moved her file and sat on the chair beside her at their old teak table. “Franco won. ‘They won the war but we had all the best songs.’”

“What songs? What songs were better than winning?”

“Not better,” he said. “Just walking away with something. ‘Viva La Quinze Brigada.’  ‘Long Live the Fifth Column.’” 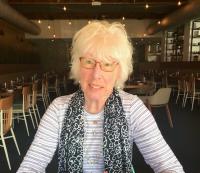