The Book that Sells Itself

A Parable in Four Parts

Welcome back to our tale of the unusual. We have arrived at the third installment of the story of “The Book That Sells Itself, a Parable in Four Parts.”

In the previous episode we meet an elderly blind printer who claimed that he was the man who published the mysterious book titled The Fruit With No Stone.

Let us learn a bit more about this interesting fellow.

Jacob is the printer’s name. He pronounces the J in the soft manner as did the German people of the past. Maybe they still do. But these days Jacob the printer never has the opportunity to correct anyone on such matters as the pronunciation of his name. The services provided by a printer are no longer in demand.

His world has become quite small. Lonely.

Jacob wishes he had asked the salesman to stay for tea. He didn’t even learn his visitor’s name.

Now that the salesman has closed the door behind him, Jacob stands perfectly still—his assistant obligingly does as well—and he listens to the sound of the man’s boots clomp across the porch outside and then thud down the five wooden steps to the unpaved road. There follows a shuffling sort of noise that Jacob comes to recognize as the salesman removing something from his horse cart. Maybe a rucksack or a bindle filled with food and a canteen. And finally the man can be heard walking down the road until his footfalls can no longer be separated from the sounds of nature.

When all is silent, Jacob turns and takes several measured steps to the far side of the shop. He sits in an overstuffed armchair. The mute assistant hands Jacob the book—the blank book the salesman left—and then seeing that his employer is comfortable in his favorite chair, the younger man selects a broom and a dust pan from a narrow cupboard and begins to tidy the shop. It is the activity associated with end of the workday, and not the sort of thing one does so early, before the midday lunch break, even. The rhythmic swish of the broom generates a relaxing atmosphere and soon Jacob has settled comfortably in his chair with his feet resting upon an ottoman.

The Fruit With No Stone would not draw much attention were one to see it on a bookshelf, but this book Jacob holds so delicately in his hands is his favorite. It combines utility with a subdued beauty. He has no trouble remembering this commission, even though it was carried out so many years ago. For the interior he chose a traditional linen laid paper. The cover of the book he bound in a rustic buckram that had been dyed a deep burgundy. The typeface was one he had designed himself. He had based it on a neoclassical style, the bracketed serifs firm, almost stern in their strokes.

Jacob did use to love book design. Do you remember what he said to Leighton? He said he wasn’t always blind.

Jacob sighs and leans his head back. The cataracts obscure his irises and pupils so one cannot tell where his eyes are cast—not that it matters—but the way his mouth softens into a smile and his jaw relaxes it is easy to tell he is looking back into the past, examining a fond memory or two.

Such as the day that extraordinary manuscript arrived. It was early in the spring, a chilly enough morning that he had just replenished the stove at the back of the shop with an extra hickory log.

Or maybe he is recalling those joyous afternoons he spent transferring the handwritten pages into line after line of type. His sight was already failing, and he had to squint in front of a magnifying glass to make out the words, letter by letter. Not the optimal way to read a book, I’m sure you’ll agree. But you’ll also agree that there is something calming and contemplative about that sort of unhurried and intimate work.

You might hesitate to even call such activity reading. However those words did manage to make something of an impression upon Jacob’s brain. Not on the surface. No. But deep down in the, well, if the brain has a marrow, that’s where all of those magnified letters are immutably etched.

At this moment, cozy in his armchair, Jacob opens up the book. He lowers his head. And he begins reading. Yes! You heard that right. Like warm breath on frigid air a swirl of something tangible appears on the blank page. Words! Printed words. They take form, that familiar font (familiar, certainly, to Jacob). 12 point Millbrook. The edges of each letter become clear. Sharp. Line after line, page after page, the blind printer reads the words back into the book.

Finally, he is done. When Jacob stands up, his assistant puts away the broom and comes to collect the book.

Jacob’s eyes are clear, now. Irises and pupils well-defined. He watches as his assistant places the book into a large box with many other such books. Not a cardboard box. A wooden box that very much resembles the old chest that the salesmen won at the auction in the barn. The chest is now full. Filled with copies of The Fruit With No Stone.

The rusty hinges groan as the assistant lowers the lid.

“I guess it’s time for you to head back into the world,” the printer says. “To let someone else find a chest of wondrous books. That horse and wagon will come in handy.”

The assistant nods. He lifts up the chest of books with a grunt.

The printer walks to the window and looks out. The novelty of being able to see again commands his full attention. He barely hears as his assistant struggles with the load of books he carries across the creaking floor. Only vaguely does Jacob register the sound of fumbling to open and then close the door. And by the time the clop of hooves and the squeak of wagon wheels reach Jacob’s ears, those sounds of his assistant’s departure are as vague as if they are memories from someone else’s dream.

Jacob leans his forehead against the glass of the window, his breath fogging a little circle. He looks at that hill. A beautiful fat cloud like a pile of meringue floats above it. His sight, on those rare days it returns, never lasts long. And by the time the cloud has drifted so that it casts a shadow down upon the little town of Torumbra, Jacob’s eyes are, once again, dull, opaque.

He shifts now to his mind’s eyes.

He imagines a place he has never been. A valley. A marvelous green valley beyond the hill behind the hill.

He is convinced that there is nothing. That lush green valley is where it all ends. And maybe where it all began. He likes to think of it as a peaceful and temperate home to those wayward visitors who traveled to Torumbra Press for answers, each blind in his or her own way. How many has Jacob sent over the hills? He has long ago lost count. There they wait out their years with the clover and wrens and honeysuckle vines that dip lazy into the slow moving waters of a shallow creek.

Or so he imagines.

Now I’m thinking you have questions. So many questions. Such as where did all those books come from? The ones in the chest the mute assistant just carted away. Did it takes years for them to find their way back to the printshop? Or are they part of the original print run from all those years ago? Or maybe Jacob, when he miraculously read those words back into Leighton’s book, somehow caused, through some ancillary “magic,” the rest of the volumes to appear, multiplying like mythical loaves and fishes.

Those are a lot of questions.

But here’s all that you need to know.

You might have guessed by now, this is not Jacob Millbrook’s story.

Join us next week, when we complete our wondrous tale. When we finally learn all. Yes. About everything. Your patience will be rewarded.

So, until part four, good night. 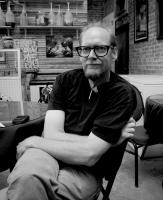 Erik Bosse is a New Orleans-based writer, filmmaker, and creative collaborator. His short stories have appeared in many literary journals. In the summer of 2023 his novel, Tales of Lost Southtown, will be published by FlowerSong Press. Much of Erik’s work can be seen on his website, www.erikbosse.com. Erik recommends URBAN-15.