‘All we are saying;’  The locked boardroom held a tension that was instilled by the presence of at least one AK47 resting on the rich mahogany table between cups of coffee, the men sitting behind it wearing balaclavas.

It started off as a brain-storming session; an informal meeting between the client and advertising agency in which to bounce around ideas that might improve their somewhat stagnating public image.

A pained smile suction-cupped to the female agency director, left leg hooked over right knee, bouncing like her limb was possessed; hands clutching her coffee cup like talons; those mascara-caked eyes refusing to be budged from the weaponry on display.

‘Maybe a charity might not be such a bad idea.’  The client manager, early thirties, balding already, pacing back and forth next to a projector that coloured his white shirt with archive stills of Third World orphans.  ‘You tell us you’re not terrorists, but freedom fighters; waging a war against state oppression?  You need to change the public’s perception of that; people see you dressed in black, sporting balaclavas and AK47s and they think, “I’m gonna die!”

The sweat patches under his arms were visible, and it wasn’t just the lack of air-conditioning, either.  Blank eyes staring out through black cotton was enough to implant stage fright.  The fact that they had guns meant this meeting could be life-changing, literally.

‘They won’t let us do that.’  A gruff voice that could have come from either of the two men in black.  ‘Our name’s too well known.’  A slight pronounced lilt to the English.

‘Why not change your name!’  A reflex-answer that swelled the directors face bright red in an instant, leg stalled on the summit of her knee, mascara cracked as she screwed her eyes closed in early response to the sudden sound of gun fire she foresaw.

In the silence, she risked a glimpse to see the two terrorists motioning their heads at one another.

Spurred on by the lack of gun fire and the fact she was still breathing, she dived in, eying her colleague who had half his body hidden behind the projector board.  ‘Companies do it all the time; remember Marathon and Opal Fruits?’

‘Did you have Jif in your country?  Bounty kitchen towels?’  The client manager, peering out from his sanctuary.

Shaking heads; they knew confectionary but not kitchen cleaners.

‘Even banks are changing their names, now, in the wake of the credit crunch.  What we have to do is retaliate against the West’s branding; Bush’s “War on Terror,” how did that affect you guys?’

One of the men spat on the plush carpet on hearing the ex-president’s name.  They would have to get the name of that carpet cleaner service from Sophie later.

‘This image of Terror is derogatory; it’s crippling your organisation.  I bet you’ve had to lay low for a bit, am I right?’

The two men nodded, one of them retrieving his cup from the desk to take a swig of their Westernised freeze-dried coffee.

‘The whole “Axis of Evil” thing, couldn’t have done you much good, eh?’

Mouth full of coffee at the time, most of it splattered the carpet.

Moving around to the laptop, wired up to the projector, the client manager clicked a few keys before standing up next to the board.  ‘We knocked around a few ideas before the meeting; let’s see what you think.’

On the board, photos of pre-teen boys playing video games, mainly war genre titles.  ‘What do you think about a range of video games?’

Through the mouthpiece, it appeared as if the two men were smiling.

‘Advertising’s all about the kids, these days; and the video game industry is worth billions.  You tap into that market, you get funding, right off.’

‘Secondly, you get the credibility with the kids.’  In a high pitched voice; ‘”I want to be Mohammed!  I want to destroy the Imperialist Monsters!” Right?’

‘Imperialist Monsters.’  Repeating the phrase with a twinkle in his balaclava eye.

‘Lastly, fellas, you got your instant recruitment; I’m thinking online multi-player tournaments, chat-rooms.  Add a little propaganda to the mix, and you got subliminal brain-washing, right there!  Your own youth movement, who will have absolutely no idea what’s happening.’

‘Slight concern.’  The director had to spoil it; he’d had them eating out of his hands, actually smiling.  Now she had a slight concern.  ‘The larger stores won’t stock it; I’m thinking supermarkets over here and stores like Wal-Mart and JC Penny across the pond; they won’t go for it.  That’s, what, maybe forty-percent of the market?’

He allowed himself a laugh, in hopes of buoying the terrorists back; ‘You’re not taking into account the free publicity they will provide.’  Looking from his director back to the two men opposite.  ‘These stores start banning the product, get the church involved, we get headlines; if the games are banned, they must be good, right?’

Grins back beneath the masks.

‘You know yourself, what they can’t have, they want all the more.  These big stores want to ban it, the kids will get it online, from friends at school; bootlegs up and down the country.  The state can’t control that kind of exposure.  They can’t even stop illegal music downloads.’

Bending down to hit the next screen; ‘And, if that doesn’t float your boats -which I can see that it does - what about the animated series on cable?’  On screen, generic muscle-bound stereotypes of these men, portrayed as the heroes rather that the villain.  ‘Once we get the syndication rights out there: we got toys, breakfast cereals, lunchboxes, school bags; the reach is endless.’

The next screen, flashed up on the projector showed caricatures of Western heads of state, both past and present, running from the White House, Big Ben, the Eiffel Tower all of which, reduced to a flaming rubble.  ‘How about that?’

Positive nods from the two men.

‘The West’s having a bad time of it in the press at the moment what with Europe-wide austerity and the new cold war and so on; we think this is the ideal opportunity to jump on the band wagon, as it were, to bash the West.’

Strutting around to their side of the large board room table; confidence building into arrogance now he had them both sitting up.  ‘Sorry, and, let me know if I’m overstepping any boundaries right now, but could I ask you gentlemen to remove your balaclava’s for a second?’

The two men stiffened up, corpse-like hard; the client manager perched on the edge of the table, just out of harms reach.  ‘Just, humour me for a second, yeah?  It’ll all make sense, trust me.’

‘No.’  Hand reaching out to stroke his weapon.

Hands up in the air; ‘That’s fine, if you’re not comfortable, that’s okay, that’s cool.’  Walking back around to the projector, the director’s eyes wider now the gun was back in the forefront.  ‘It’s just that, well, the public like to see their heroes faces; digressing slightly, a poll was taken a while back that proved that women and children found it hard to relate to or trust men with beards.’  Hands sweaty, creeping along thin ice.  ‘When the beard was removed, that same clean-shaven face went up in the poll.  And, I’m betting the same can be said with those balaclavas.’

The two terrorists eyed one another, shifting the hand from the machine gun up to his masked face.

‘With a name change, charity registration; again, another avenue of legitimate funding, and this video game behind you, we can guarantee your reputation and credibility will increase by at least a modest projection of thirty to forty percentage in just a six months intensive marketing campaign; I’m talking saturation: TV spots, virals, social media, press, buses, trains, billboards, pop-ups.’

The man with the gun, tore off the balaclava, looking a little unsure of himself; embarrassed, face down a reddish tint to his Mediterranean flesh tone.

‘That’s what I’m talking about!’  The client manager and his director smiling so much the room temperature seemed to dip slightly when, in reality, the close un-air-conditioned space was palpable.

Just as the projector image died, shrouding the room into instant darkness.  Outside the shuttered windows, bright lamps flooded the boardroom, causing the man who had removed his mask to replace it.  Acoustic feedback, somewhere five stories below them, ricocheted into the room, all hands flinching up to their ears in protection.

“THIS IS THE POLICE!  WE HAVE THE BUILDING COMPLETELY SURROUNDED!  LET THE HOSTAGES GO OR LET US KNOW YOUR DEMANDS!”

The two advertising executives crossed eyes; ever since the terrorists had stormed the building and taken them hostage, their instincts had been keeping them alive.  Along the corridor, their friends and co-workers who hadn’t been so fortunate, were lying in pools of their own blood and faeces, statistics to be used and exploited by agencies such as themselves.

In a myriad of barking orders and noise, they found themselves being forced to the plush carpet, inches from the coffee stain and saliva expired by the man holding the machine gun above them.

Being the only two remaining hostages, they saw themselves being rescued in a hail of teargas and bullets, gunfire and explosions; the talk show circuit a matter of weeks away.

A slight smile crept across the client manager’s lips as he thought about quitting this job, one way or another.  With nothing to lose, now, he turned to his director and told her where she could shove her job, should they ever make it out of there alive. 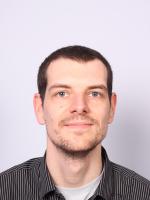 Mark Robinson is the author of over 20 short stories, plus numerous abandoned novels, most of which have found homes in print (Raw Edge, Transmission and A Thousand Faces) and online (TKnC, Powder burn Flash, ATON, Flashes in the Dark, Static Movement, Unlikely Stories, Micro horror, Hack writers, BTAP). He lives and works in the UK and in cyberspace at markrobinsonwritersbloc.blogspot.com.