She had been at these conventions before: eight of them, one each year. There was a certain sameness to them, yet each year was different: new faces, new topics, new conversations, new complaints. Some years the beds were bad, some years not; some years the food inedible, some years not; some years the meeting rooms air conditioned, some years not. There were years when people got upset about a proposal or a course of action, and years when all the discussions moved amicably along through disagreements and alternate viewpoints. There were years when the meetings were far from the dormitories and years when they were not; there were years when it rained and years when only the summer air was moist. Sometimes everyone sat in an auditorium and looked down upon a stage; sometimes everyone sat at tables in a hall and looked up at a rostrum. In the evenings there was always beer, usually a poker game in a lounge somewhere, often a few people who were generous with their dope. In the evenings, there was always talk until ten, eleven, twelve, midnight, one, and even two or three; in the evenings there were always a few people pairing off, obviously or not so obviously, innocently or not so innocently.

She knew this and looked forward to it each year; each year she tucked a sleeveless cotton dress with a good wide skirt into her luggage to drench with sweat on Saturday night. But this Saturday night she was dubious, because she was already exhausted, worn down with running meetings, writing agendas and proposals, calming tempers, hustling discussions to a productive end without veering too far onto a dozen tempting byways. Over those eight years she had gone from a new face unsure what she was voting on to an old hand. She had a clear, strong, actress’s voice, a straight posture in front of an audience, a calm outlook, and a firm grasp of priorities. When people asked her opinions, she gave them; when she didn’t give a damn, she said so. Already this weekend she had led two caucuses to closure and told the other people in the women’s caucus that she neither felt discriminated against nor that there was an imbalance of power between the genders in the organization. Now she was worn out and coming down with a cold, and by god did she really want to put on a party dress and dance and drink beer until two a.m. this year?

But there was Millie Mastey in the women’s bathroom patting on rouge and transforming herself, and after all maybe that purple sleeveless cotton party dress would be a lot more comfortable than the mundane T shirt and loose pants that formed a virtual unisex daytime uniform. So she went to her room and changed and sashayed off down the yellow brick path to the party. 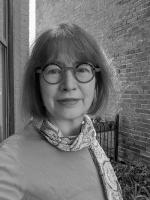