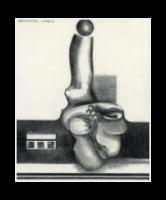 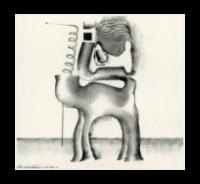 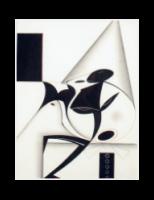 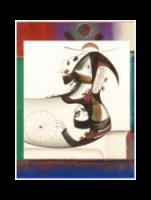 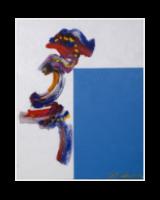 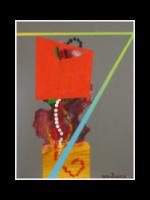 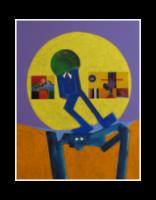 Eugene J. Martin's art is best known for his imaginative, complex mixed media collages on paper, his often gently humorous pencil and pen and ink drawings, and his paintings on paper and canvas that may incorporate whimsical allusions to animal, machine and structural imagery among areas of "pure", constructed, biomorphic, or disciplined lyrical abstraction. Martin called many of his works straddling both abstraction and representation "satirical abstracts".

Eugene James Martin was born on Capitol Hill. His parents were Margaret Helen Dove and James Walter Martin, an itinerant Jazz musician. After his mother died in 1942 giving birth to Jerry Martin, the two brothers were placed in foster care in Washington DC. As a child, Eugene ran away on several occasions, was placed in reform school at six years of age, and eventually spent the remainder of his childhood on a farm in Clarksburg, Maryland. On the farm he drew realistic portraits and nature scenes, and also played upright bass, thunder bass, and slide trombone in the local rhythm & blues band The Nu-tones.

After attending the Corcoran School of Art in Washington D.C. from 1960–1963, Eugene Martin became a professional fine arts painter, considering artistic integrity his only guide. He did not adhere to any particular school or art movement, remaining an individualist throughout his life. His art defies categorization. While spending most of his life in Washington D.C., in 1996 he moved to Lafayette, Louisiana with his wife, Suzanne Fredericq, a biologist, whom he married in 1988. In December 2001 he suffered simultaneously a brain hemorrhage and stroke while in Belgium. After undergoing physical therapy in Lafayette, he resumed painting and continued creating art until his death. 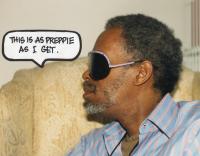 More information about the art of Eugene J. Martin, including many links, can be found at http://www.eugenemartinart.com. The Estate of Eugene James Martin is represented by Guido Maus at Maus Contemporary/beta pictoris gallery in Birmingham, Alabama. Bio photo is a 1998 self-portrait, "This is as preppy as I get."