“Here’s what people don’t get,”
Barbara said. She’d just taken
some guy’s $60 and put it on Pump #1,
where a Trump-stickered GMC stood and,
if you looked closely, might be smoking.

“The price notches up
a couple pennies, pennies mind you,
and people completely lose their shit. I had a guy
in here three days ago,” she pointed across
the mini-mart, “whacked that whole Hostess
display down because he said we’d jacked up our prices.
Had he been paying attention, he’d have noticed
they’d gone down three cents that day.”

“I get it. I don’t like big oil companies
either. I just cash their checks! Sometimes
I think the sign out front the station is the only
stock report some people get. Shoot, maybe it is.
Maybe we’re training a whole generation
of investors, one jacked-up price
at a time.”

You’ve seen them on roadsides
bicycles painted white, a memorial
to one struck down mid-stride.

He rolled up to the front of Arby’s​
chained his prized-transport to wrought iron.
He doesn’t buy anything, plugs a cell into an
outlet reserved for customers, begins a
hilarious conversation with himself.

When he kicks his feet up on a chair
I wave them down, and when he helps himself
to the ketchup and horsey-sauce bar I shoo him
back into the rain, onto a bike painted haphazardly
that should’ve been allowed to lie still for eternity. 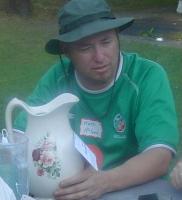 Matt McGee writes in the Los Angeles area. His poetry has recently appeared in Spectrum, Vine Leaves and Riverbabble. His first novel Wildwood Mountain was released June 19th. When not typing he drives around in a vintage Mazda and plays goalie in local hockey leagues.