This morning, my coffee and I mourned
freedom’s depravity which left for
good with spring’s last gasp. Mornings are cool,
desolate souls, locked in chastity
belts and fears of hell, sipping with no
regrets, no improbabilities,
no bad choices, no iconic mis-
takes with which we groan and grow. Christ said,
Go and sin no more. He never said
sin would dissolve. It’s our best spanking
branch, our finest ruler across the
knuckles, those mistakes and choices. So,
I mourn the revolution I came
to know, mourn the sweet, sad, dangerous
moments that have lost the war to high-
principled zealots and minds rooted
in what is best for each and for all.
I miss being a stick figure posed
for a pornographic video.

For we know that the whole creation has been groaning together in the pains of childbirth.
Romans 8:22

When we think back on it, we’ll call it “the end times”
and remember the strongmen tying knots in their thick ropes
just before they used them for saving those in the crevasses.

We’ll remember how false confessions were forced out of the mouths of our daughters.
The infidels used poisons and magic to effect this—
a worthy pursuit for the dark witches.

When the sea pulls out, getting ready for the enormous tidal wave, we’ll think of the bears and the chimpanzees—how they were released from the zoos and were free to roam what
was left of the earth.

(I don’t remember what happened to the rest of the animals, do you?)  The sea will pull out, as I’ve said.
You must believe it or you’ll have no part in the dialogues.
We will call it “end times,”

and reminisce about seeing bats—how they followed the seagulls out to sea and drowned there (as did our Nana’s only son.  She had daughters, but poor, drowned Ned was her only boy.)  We were raised on mysticism
and mine disasters

and we watched our fathers spit tobacco out into the orchards or the fields or the ocean.  We will look back at the last of the sunflowers leaning so low, and we’ll recall the “end times,” swooning at the way the brown sky infiltrated houses,

and temples and concert halls.  The proper incantation is the one that brings loved ones back to life after they’ve passed over to the other side.   My mother knew this, so did her eldest sister.  They held hands sometimes

and chanted it low and sweet over the newly-dug graves in old cemeteries.  Now my mother has died and my Aunt, her eldest sister, says there are no incantations.  By the time the grasses have all been burnt,

the only good books will be photo albums with pictures of amusement park rides and
the “end times” as we remember them. While the hookers count their stretch marks and
the pimps count their money,

we will chuckle over the way hundreds of cars simply stopped on bridges and people got out of the cars and looked over the sides down into the lakes and dry creek beds to see if anything could be devined there.

We’ll call them “the end times,” and nod solemnly.  We will cut our eyes to the side and smile at each other’s chatter; each of us will believe that he or she owns the truth.  Not so.  We all know the same secret:

there is sunlight and there is snow and horse piss steams in both.  The “end times” will buckle and roll in our memories.  Hoping for further mercies, we’ll walk naked to the sea; we’ll stand and watch it disappear

*John Nelson Darby first proposed and popularized the pre-tribulation rapture in 1827. This view was accepted among many other Plymouth Brethren movements in England. 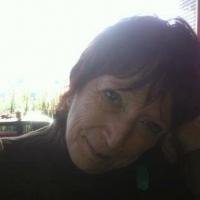 Martina Reisz Newberry’s newest collection, Blues for French Roast with Chicory was published by Deerbrook Editions in February, 2020. Her work has been widely published in the U.S. and abroad. She lives in Los Angeles with her husband, Brian Newberry, a Media Creative.