Superegg Atlantis the Team of Bone the End of the Dial

uranium was crown of the ocean floor
butterflies produced a rain of blood
as from his seed form garden by new birds
in the cat's brain, hundreds of young stars
of cluster a mouth
and dozens of suction-cup
the dusty pillars
600 miles over the sea

around the tentacles are primitive eyes
a tick-tock in the living
of the cylinder, old stars that have a bony ring
mirror-image antiparticles
the seeds for galaxies
the jaw-crusher

I have buried men like gods
dressed in the rags of the state,
my fiery way
in the throat of things to come,
beautiful women robbed
of beauty and sense,

and cried eternal things
from their bouncing parlors
and burnt kitchens
gave my blood and inner workings
to their bliss and their brooding,
the corners of daylight
meshed with magma on a drifting floor

my body all, my friendly circuits
lashing lacquered wounds,
I stand in my shop of all people moving
color's vapor to part acid,
and I stand unwillingly
with the despised poor,
with those mercurial
who pills sent over the mountains
to beg bread,

sweeping my wings like arms
with the emptiness of spiritual power
I drag down your weary hearts
from peaks of lovelessness
bring you close to the floods of earth
and crush you in.

Crumpled wings and broken rotor blades
he rode upward, out of control, until the outward nerve fibers
multi-engined over the tropical grassland like outraged beasts,
and the shoestring jungle of the new men, waste dinner in the brightly lit ship

we forget everything, where we are, that the tiny breakaway nation
can come from the sky and their student who felt no pain and died
with an angelic face lawless as his elders

he crossed the coastal mountains by his cracked undercarriages
rang venison, fruit and cream, the wine flowed and glasses clinked; towns
droned across immense open spaces where no TV or nightclub
repeated many times: bell, meat powder, salivation, bell. 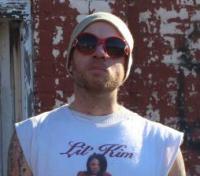 Luke Buckham writes, collages, raps and sings, plays bass and drum and works as a janitor in New Hampshire. He was born in 1980. You can access more of his poetry through his blog at http://thenewtimes.blogspot.com/, where he posts regularly, check out his visual imagery on Facebook at https://www.facebook.com/luke.buckham/photos_all?lst=844509529%3A844509529%3A1527606440, and listen to his music on Soundcloud at https://soundcloud.com/luke-buckham and https://www.youtube.com/watch?v=S9K-ZPmVVgU, where he has posted over twenty music videos in collaboration with video artist Bret Leighton. About himself he has little to report apart from the diary of cultural guilt already committed to social media. Write him at honeybadger36@hotmail.com. Photo by Em Langevin.