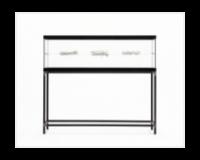 Who should speak when the subject of art is racism? Is it the subject/victim only, when/if he or she is still able to speak? Or is it the perpetrator, in the zero sum game, victor-takes-the-spoils collapsing American psyche? With racism, you have two actors, two groups, a protagonist and an antagonist, a perpetrator and a victim, an Us and a Them, often, though not always, black and white. In this instance, whose voice has the authority to speak, indeed, to critique, the juggernaut of racism in the United States, that groaning, bloated, yet somehow newly recharged monster that so many people had naïvely relegated to the past? Who is responsible for her group; who is implicated by her privilege, and who by her debasement? And will the message necessarily be different if it comes from either messenger?

I acknowledge my white privilege as a direct remnant of slavery, the result of atrocities committed against others. I explore it through my acute awareness of the unearned advantage my white skin holds. White privilege controls America’s heartbeat, and our nation’s collective loss of memory, our historical amnesia, is to blame. I examine my self and identity in a critical manner; I hold my audience and me accountable for our complicity. Indeed, it is past time for white Americans to hold accountability for and stand up to the injustices of racial oppression.

My art is an expression of my activism, constantly and consistently mining the past to disrupt the present in order to secure the future. It is loud, expressing the pain and rage of our continued collective disavowal of responsibility from the very systems we uphold. My work is rooted in a critique of white supremacy and the systemic oppression of people of color in the United States, and it is reactive to the violent, vicious, genocidal, and unapologetic way in which we differentiate between each other based on race, gender, and class.This is the great moral issue of our time. And this is why I’ve devoted my artistic practice entirely to breaking white denial and addressing social justice issues centered on racism. The notion of the artist as activist is at the root of my practice. My art is protest art and is reactive and loud and meant to elicit a higher consciousness. It should be observed as a civic tool.

White privilege, white power and white supremacy control America’s heartbeat, and our nation’s collective loss of memory, our historical amnesia is to blame. My work reflects my acute awareness of the unearned advantages my white skin holds.

Passionate, gregarious, and larger-than-life, TiRock Moore could not have been born of any place other than New Orleans. Memories here are long; allegiances are as ideological as they are familial. For Moore, a daughter of the South and the Civil Rights era, a child and still-denizen of the French Quarter and the arts, and a pioneer of LGBTQ rights who has never lived above the Mason-Dixon line, white privilege and the racism it engenders has always been a highly visible, salient, and uncomfortable reality.

As one of the first students at the New Orleans Center for Creative Arts (NOCCA) in the 1970s, Moore began to envision for herself a creative life. Transported by Judith Jamison’s groundbreaking performances in Revelations and Cry for Alvin Ailey American Dance Theater, Moore initially pursued dance as her medium but eventually detoured from dance to dentistry before landing on her ultimate life’s work. Later, Moore’s activism in the '80s and '90s indelibly informed her focus and second-career passion and intensity for exploring what is for many the most recalcitrant of American vices: hatred based on race.

Emerging in 2014 with protest works created, in part, in response to the devastating, lingering effects of Hurricane Katrina, Moore renamed herself in homage to colorful and controversial twentieth-century painter Noel Rockmore, a New Yorker turned New Orleanian who, like Moore, had been the child of artists. Moore’s self-identification (petit or ‘tit in local parlance) with the mercurial Rockmore as a kind of spiritual protégé positions her within both local history and artistic traditions. Yet there is nothing small about Moore’s driving vision and ambition for her work, which focuses on dismantling the structures that support racism. This history is as much hers as it is ours; indeed, it is a distinctly American narrative Moore seeks to unravel through her work.

TiRock Moore is represented by the Jonathan Ferrara Gallery in New Orleans, Louisiana.